On September 21, 1823, the angel Moroni appeared to Joseph Smith in his bedroom. In addition, to his instructions regarding the gold plates, Moroni quoted from five different chapters in the Bible (Mal. 3, Mal. 4, Isa. 11, Acts 3:22-23, and Joel 2:28-32). Moroni quoted each of these passages as they appear in the King James Version of the Bible with the exception of Malachi 4. The changes made were so significant, that the text was included as a section of the Doctrine and Covenants.

"Joseph didn't totally understand those scriptures that night, but Moroni informed him that the prophecies were about to come to pass. So as we can see, this doctrine (of a vicarious work) was reestablished early in the restoration process so that this generation could be responsible for providing the redemptive work for past generations.

"This doctrine is unique to The Church of Jesus Christ of Latter-day Saints. It provides an opportunity for all mankind to hear the gospel. The Lord's temples are built on the basis that life extends beyond this mortal world and that those who have passed on from this life are vibrant and interested in their own salvation. This doctrine has been clearly established by the prophets. There are important reasons to link generations-son to father, father to his father, and so on. Therefore, we do this work." ("Everyone's Blessing," Ensign, Dec. 1994, 16)

...it is tremendously significant to me that this declaration, this repetition of the wondrous words of Malachi concerning the work for the dead, was given to the boy Joseph four years before he was allowed to take the plates from the hill. It was given before he received either the Aaronic or Melchizedek Priesthood, before he was baptized, and well before the Church was organized.

It says much concerning the priority of this work in the plan of the Lord. ("A Century of Family History Service," Ensign, Mar. 1995, 61) 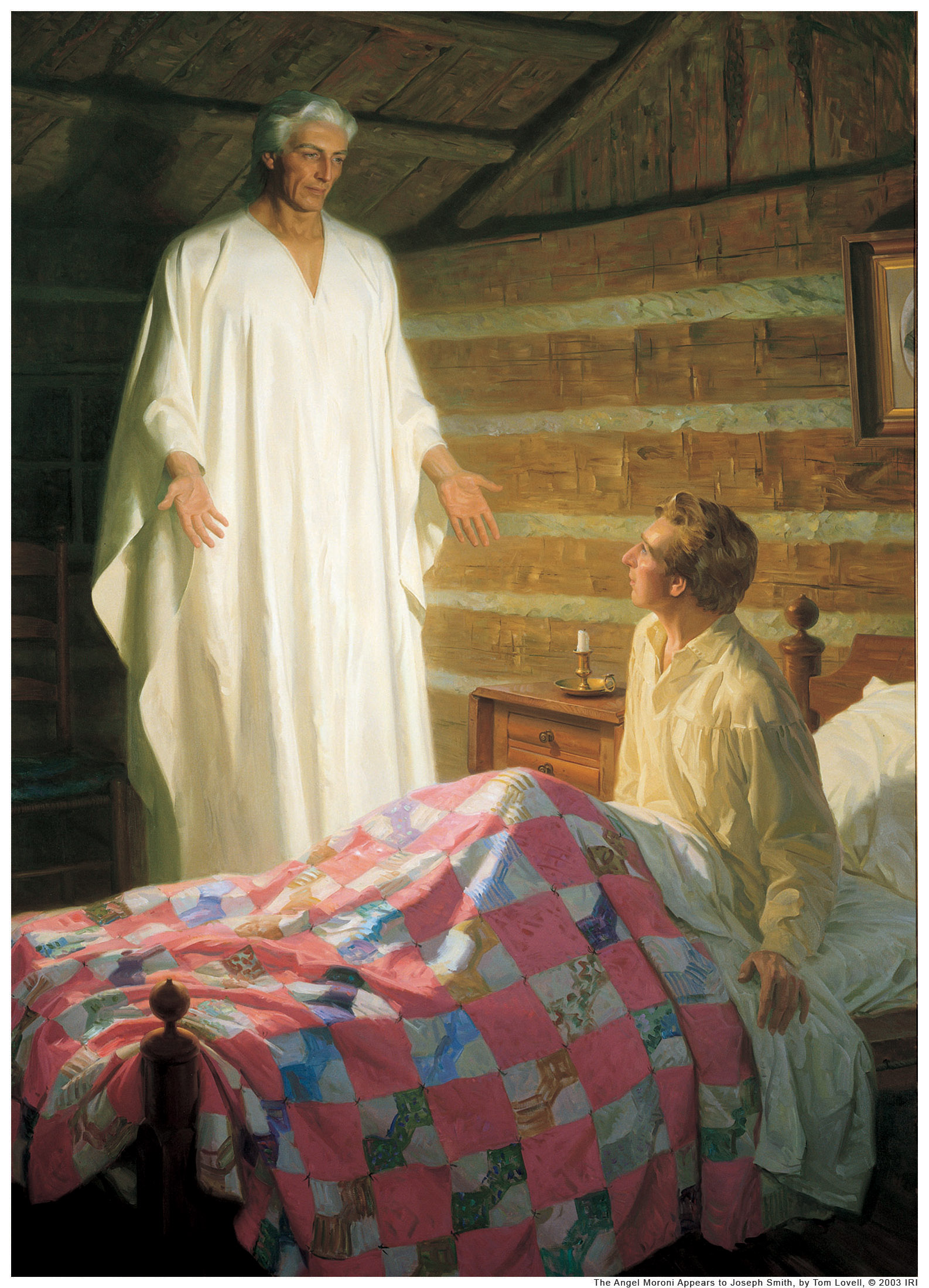 DC 2:1 I will reveal unto you the Priesthood, by the hand of Elijah

To the 17-year-old Joseph, Moroni prophesied of an event to occur on April 3, 1836, when the ancient prophet Elijah would appear to him and Oliver Cowdery in the Kirtland Temple (DC 110). By 1836, Joseph and Oliver had held the Aaronic and Melchizedek Priesthoods for over 6 years. So why does Moroni say that Elijah would reveal 'the Priesthood'? Hadn't it already been revealed?

Even though the Aaronic Priesthood and Melchizedek Priesthood had been restored to the earth, the Lord urged the Saints to build a temple to receive the keys by which this order of priesthood could be administered on the earth again, "for there [was] not a place found on earth that he may come to and restore again that which was lost ... even the fulness of the priesthood." (D&C 124:28; italics added.) ("What I Hope You Will Teach Your Children about the Temple," Ensign, Aug. 1985, 10)

DC 2:1 Why Elijah the Tishbite?

DC 2:2 Why does Moroni quote this passage differently?

Malachi says that Elijah 'shall turn the heart of the fathers to the children' (Mal. 3:5-6). Moroni changes this passage to read 'he shall plant in the hearts of the children the promises made to the fathers.' If we remember that Moroni's message to Joseph Smith was delivered four separate times (JS-Hist. 1:30-49), we are sure that the Prophet recorded the message exactly as it was delivered. Why then did Moroni change Malachi's prophecy?

From this we learn that Elijah was to perform two great works: one among the spirits in spirit world, and one among those in mortality. Malachi speaks of both of these missions; Moroni speaks only of the latter. Why would this be? Well, we might ask what Elijah did in the spirit world to turn the hearts of the fathers to the children? If we are honest with ourselves, we must admit that we don't know. Most likely, he administered priesthood authority to the leaders in the spirit world whereby they could perform a work which would help the dead realize their great need for saving ordinances? Do we have any scriptures which tell us of this specific event? No. Do we know when it occurred? No, but we know that it must have been fulfilled according to the prophecy of Malachi. Other scriptures suggest that this process may have begun in the meridian of time, in conjunction with the Savior's ministry among the spirits in paradise (see commentary for Luke 1:17).

The author's conclusion is that the father's hearts had been turned to the children long before Moroni appeared to Joseph Smith. That work had been underway for such a long time that the spirits in the spirit world must have longed for the day when their descendants would be filled with the spirit of Elijah and perform a vicarious work for them. Perhaps this is why Elijah said on Apr. 3, 1836, "the time has fully come, which was spoken by the mouth of Malachi" (DC 110:14, italics added), indicating that prior to 1836, the time had partially come already-that the prophecy referring to the fathers' hearts turning to the children had long ago been fulfilled. All that remained was for the sealing power to be given to the living.

DC 2:2 he shall plant in the hearts of the children the promises made to the fathers

"Abraham and others of the father received promises from the Lord of an exalted reward for faithfulness to their covenants with him (Abr. 2:9-11, Gen. 17:19, Gen. 28:12-14, JST Gen. 50:34, 2 Ne 3:5, Heb. 9:15). It is expected that the hearts of Abraham's descendants would turn to their forefathers and desire the same blessings for themselves and their dead loved ones. Otherwise, the earth would be wasted. Elder John A. Widtsoe explained the significance of these promises and the Latter-day Saints' part in them:

'In our preexistent state, in the day of the great council, we made a certain agreement with the Almighty. The Lord proposed a plan, conceived by him. We accepted it. Since the plan is intended for all men, we become parties to the salvation of every person under that plan. We agreed, right then and there, to be not only saviors for ourselves but measurably, saviors for the whole human family. We went into a partnership with the Lord. The working out of the plan became then not merely the Father's work, and the Savior's work, but also our work. The least of us, the humblest, is in partnership with the Almighty in achieving the purpose of the eternal plan of salvation.' (Utah Genealogical and Historical Magazine, Oct. 1934, p. 189; see also History of the Church, 6:59-61)" (Doctrine and  Covenants Student Manual, 1981, p. 8)

I know the priceless worth of the gospel and the blessings that flow from it, I have a desire that my ancestors-those who lived when the gospel was not on earth and who have not had the privileges which are mine-I have a great desire that they also should be inheritors of these blessings. In other words, the promises made to the fathers have been planted in my heart, and I am obligated to act as a minister for the salvation of those in my line who have lived and died without having the gospel preached to them.

And now, if I do what I should, I will search out and identify those who have gone before in my lineage, and will see that the ordinances of salvation and exaltation are performed for them. (Conference Report, April 1959, Afternoon Meeting 118.)

DC 2:2 the hearts of the children shall turn to their fathers

The word plant was introduced by the angel Moroni...The seed planted by the Lord, through Elijah's appearance to Joseph Smith in 1836, was not a full-grown tree, but only a seed. At that time there were no genealogical societies in existence. History confirms that family research in America generally commenced with the forming of the New England Historical Genealogical Society in Boston in 1844.

Thus, just eight years after that small seed of genealogical interest in our ancestors was planted by Elijah, it began to grow until now, as a result of skills, tools, and computer technology, which have been provided by the Lord, the lowly seed has become a beautiful, fruit-bearing tree.

Brothers and sisters, in conclusion, many years ago humble listeners asked Peter, "Men and brethren, what shall we do?" (Acts 2:37.) Peter replied, "Repent, and be baptized every one of you." (Acts 2:38.) To your silent questions, Where should I begin? What should I do? we say, Seek out those who are called to direct this work in your ward or branch. Go to your family history center and the temple. Identify those of your ancestors whose identity may be lost to human memory. Get started now, and the Lord will help you. ("Redemption of the Dead," Ensign, May 1991, 27)

The greatest responsibility in this world that God has laid upon us is to seek after our dead. The apostle says, "They without us cannot be made perfect;" (Hebrews 11:40) for it is necessary that the sealing power should be in our hands to seal our children and our dead. (Teachings of the Prophet Joseph Smith, 356)

The doctrine or sealing power of Elijah is as follows:-If you have power to seal on earth and in heaven, then we should be wise. The first thing you do, go and seal on earth your sons and daughters unto yourself, and yourself unto your fathers in eternal glory, and go ahead, and not go back, but use a little wisdom, and seal all you can, and when you get to heaven tell your Father that what you seal on earth should be sealed in heaven, according to his promise. I will walk through the gate of heaven and claim what I seal, and those that follow me and my counsel. (Teachings of the Prophet Joseph Smith, 340)

DC 2:3 If it were not so, the whole earth would be utterly wasted at his coming

Imagine for a moment if the "Priesthood of Elijah," or sealing powers, had never been restored. We would have a church full of elders, bishops, and high priests, but none of them would have received their endowments. None of them would be sealed to their wives. None of their children would be sealed to them nor born in the covenant. Mothers would raise their families without the hope of eternal union. Indeed, families would not be forever. We would not perform baptisms for the dead. There would be no temples. Family History work would be a useless pastime. Eventually, the power of Satan would increase among the saints until even the church itself would be good for nothing except to be "utterly wasted at his coming."

This great vision to the Prophet Joseph Smith reestablished the doctrine of eternal family units. The eternal family is central to the gospel of our Savior. There would be no reason for Him to return to earth to rule and reign over His kingdom unless the eternal family unit has been established for our Father in Heaven's children. When we understand the eternal role of the family, the nourishing and developing of strong family ties take on even greater significance. ("Youth of the Noble Birthright," Ensign, Nov. 1998, 74)

Therefore, the restoration of this authority is the leaven that saves the earth from being utterly wasted at the coming of Jesus Christ. When we get this truth firmly and clearly fixed in our minds, it is easy to see that there would be only confusion and disaster should Christ come and the power of sealing not be here. The Lord does not recognize any ordinance or ceremony, even though it be made or performed in his name, unless it is in accordance with his will and done by one who is recognized as his authorized servant...the coming of Elijah with the keys of sealing, [places] the stamp of approval on all that is done in The Church of Jesus Christ of Latter-day Saints, so that it is recognized in the heavens and before the throne of God. ("The Coming of Elijah," Ensign, Jan. 1972, 5)