April 27, (1838)-This day I chiefly spent in writing a history of the Church from the earliest period of its existence, up to this date...

May 1st, 2nd, 3rd, and 4th.-The First Presidency were engaged in writing Church history and administering to the sick...

Friday, May 18.-I left Far West, in company with Sidney Rigdon, Thomas B. Marsh, David W. Patten, Bishop Partridge, Elias Higbee, Simeon Carter, Alanson Ripley, and many others, for the purpose of visiting the north country, and laying off a stake of Zion; making locations, and laying claim to lands to facilitate the gathering of the Saints, and for the benefit of the poor, in upholding the Church of God. We traveled to the mouth of Honey Creek, which is a tributary of Grand river, where we camped for the night. We passed through a beautiful country the greater part of which is prairie, and thickly covered with grass and weeds, among which is plenty of game, such as deer, turkey, and prairie hen. We discovered a large, black wolf, and my dog gave him chase, but he outran us. We have nothing to fear in camping out, except the rattlesnake, which is native to this country, though not very numerous. We turned our horses loose, and let them feed on the prairie.

Saturday, 19.-This morning we struck our tents and formed a line of march, crossing Grand River at the mouth of Honey Creek and Nelson's Ferry... In the afternoon I went up the river about half a mile to Wight's Ferry, accompanied by President Rigdon, and my clerk, George W. Robinson, for the purpose of selecting and laying claim to a city plat near said ferry in Daviess County, township 60, ranges 27 and 28, and sections 25, 36, 31, and 30, which the brethren called "Spring Hill," but by the mouth of the Lord it was named Adam-ondi-Ahman, because, said He, it is the place where Adam shall come to visit his people, or the Ancient of Days shall sit, as spoken of by Daniel the Prophet...

June 16.-My uncle, John Smith, and family, with six other families, arrived in Far West, all in good health and spirits. I counseled them to settle at Adam-ondi-Ahman.

Minutes of the Meeting which Organized the Stake of Zion called Adam-ondi-Ahman.

Adam-ondi-Ahman, Missouri, Daviess county, June 28, 1838. A conference of Elders and members of the Church of Jesus Christ of Latter-day Saints was held in this place this day, for the purpose of organizing this Stake of Zion, called Adam-ondi-Ahman.

The meeting convened at 10 o'clock a. m., in the grove near the house of Elder Lyman Wight.

President Joseph Smith, Jun., was called to the chair. He explained the object of the meeting, which was to organize a Presidency and High Council to preside over this Stake of Zion, and attend to the affairs of the Church in Daviess county.

It was then moved, seconded and carried by the unanimous voice of the assembly, that John Smith should act as President of the Stake of Adam-ondi-Ahman.

Adam-ondi-Ahman is located immediately on the north side of Grand River, in Daviess county, Missouri, about twenty-five miles north of Far West. It is situated on an elevated spot of ground, which renders the place as healthful as any part of the United States, and overlooking the river and the country round about, it is certainly a beautiful location. (History of the Church, 3:25-39) 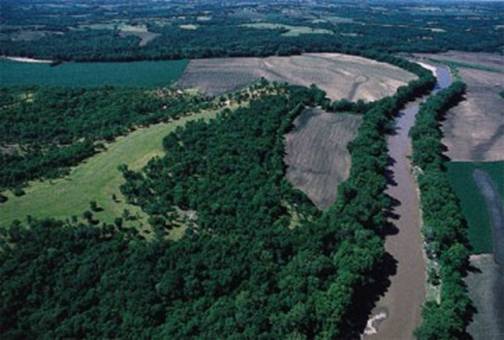 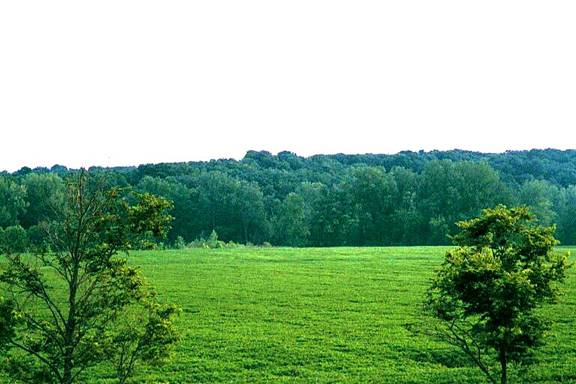 DC 116:1 Spring Hill is named by the Lord Adam-ondi-Ahman

The valley of Adam-ondi-Ahman is the place where Adam called his posterity together three years before his death and "predicted whatsoever should befall his posterity unto the latest generation." (D&C 107:42, 53-57)  Nearby Spring Hill is where Adam offered sacrifice unto God.

Adam was the first man of all men; Ahman is one of the names by which God was known to Adam. Adam-ondi-Ahman, a name carried over from the pure Adamic language into English, is one for which we have not been given a revealed, literal translation. As near as we can judge - and this view comes down from the early brethren who associated with the Prophet Joseph Smith, who was the first one to use the name in this dispensation - Adam-ondi-Ahman means the place or land of God where Adam dwelt.

Apparently the area included was a large one; at least, the revelations speak of the land, the valley, and the mountains of Adam-ondi-Ahman. They tell us that Christ himself "established the foundations of Adam-ondi-Ahman" (D&C 78:15-16), and that it included the place now known as Spring Hill, Daviess County, Missouri...

One of the greatest spiritual gatherings of all the ages took place in the Valley of Adam-ondi-Ahman some 5,000 years ago, and another gathering - of even greater importance relative to this earth's destiny - is soon to take place in that same location. Our revelations recite: "Three years previous to the death of Adam, he called Seth, Enos, Cainan, Mahalaleel, Jared, Enoch, and Methuselah who were all high priests with the residue of his posterity who were righteous, into the valley of Adam-ondi-Ahman and there bestowed upon them his last blessing.

"And the Lord appeared unto them, and they rose up and blessed Adam, and called him Michael, the prince, the archangel. And the Lord administered comfort unto Adam, and said unto him: I have set thee to be at the head; a multitude of nations shall come of thee, and thou art a prince over them forever. And Adam stood up in the midst of the congregation; and, notwithstanding he was bowed down with age, being full of the Holy Ghost, predicted whatsoever should befall his posterity unto the latest generation." (D&C 107:53-56.)

At that great gathering Adam offered sacrifices on an altar built for the purpose. A remnant of that very altar remained on the spot down through the ages. On May 19, 1838, Joseph Smith and a number of his associates stood on the remainder of the pile of stones at a place called Spring Hill, Daviess County, Missouri. There the Prophet taught them that Adam again would visit in the Valley of Adam-ondi-Ahman, holding a great council as a prelude to the great and dreadful day of the Lord. (Mediation and Atonement, pp. 69-70.) At this council, all who have held keys of authority will give an accounting of their stewardship to Adam. Christ will then come, receive back the keys, and thus take one of the final steps preparatory to reigning personally upon the earth. (Dan. 7:9-14; Teachings, p. 157.) (Mormon Doctrine, 2d ed. [Salt Lake City: Bookcraft, 1966], 21)

This gathering of the children of Adam, where the thousands, and the tens of thousands are assembled in the judgment, will be one of the greatest events this troubled earth has ever seen. At this conference, or council, all who have held keys of dispensations will render a report of their stewardship. Adam will do likewise, and then he will surrender to Christ all authority. Then Adam will be confirmed in his calling as the prince over his posterity and will be officially installed and crowned eternally in this presiding calling. Then Christ will be received as King of kings, and Lord of lords. We do not know how long a time this gathering will be in session, or how many sessions may be held at this grand council. It is sufficient to know that it is a gathering of the Priesthood of God from the beginning of this earth down to the present, in which reports will be made and all who have been given dispensations (talents) will declare their keys and ministry and make report of their stewardship according to the parable. (See Matt. 25:14-30.) Judgment will be rendered unto them for this is a gathering of the righteous, those who have held and who hold keys of authority in the Kingdom of God upon this earth. ... This will precede the great day of destruction of the wicked and will be the preparation for the Millennial Reign. (Robert L. Millet, "The Man Adam," Ensign, Jan. 1994, 14)

DC 116:1 where Adam shall come to visit his people... as spoken of by Daniel the prophet

Daniel's description of the events here referred to is found in the 7th chapter of his prophecies. The description is very imposing, hence I quote it: "I beheld till the thrones were cast down, and the Ancient of Days did sit, whose garment was white as snow, and the hair of his head like the pure wool: his throne was like the fiery flame, and his wheels as burning fire. A fiery stream issued and came forth from before him: thousand thousands ministered unto him, and ten thousand times ten thousand stood before him: the judgment was set, and the books were opened... I saw in the might visions, and, behold, one like the Son of man came with the clouds of heaven, and came to the Ancient of Days, and they brought him near before Him. And there was given Him dominion, and glory, and a kingdom, that all people, nations, and languages, should serve Him: His dominion is an everlasting dominion, which shall not pass away, and His kingdom that which shall not be destroyed."

The prophet Daniel also saw in this connection that earthly powers would make war upon thy Saints and prevail against them-until the Ancient of Days should come. "And (then) the kingdom and dominion, and the greatness of the kingdom under the whole heaven, shall be given to the people of the Saints of the Most High, whose kingdom is an everlasting kingdom, and all dominions shall serve and obey Him." (History of The Church of Jesus Christ of Latter-day Saints, 7 vols., introduction and notes by B. H. Roberts [Salt Lake City: The Church of Jesus Christ of Latter-day Saints, 1932-1951], 3:35-36)