Ezra 6:1-2 search was made… And there was found at Achemetha… a roll

Achmetha was located halfway between modern Tehran and Bagdad, in what is now Iran.  “Achmetha [was] called Ecbatana by classical writers, the capital of northern Media. Here was the palace which was the residence of the old Median monarchs, and of Cyrus and Cambyses. In the time of Ezra, the Persian kings resided usually at Susa of Babylon. But Cyrus held his court at Achmetha; and Ezra, writing a century after, correctly mentions the place where the decree of Cyrus was found.” (www.biblestudytools.com/dictionary/achmetha/)

“The Persian Empire was among the first to issue gold coinage. It operated a postal system and constructed a network of highways. Capitals or chief cities of the empire were Ecbatana (Achmetha in Ezra 6:2), Pasargadae, Persepolis, and Susa.” (David B. Galbraith, D. Kelly Ogden, and Andrew C. Skinner, Jerusalem: The Eternal City [Salt Lake City: Deseret Book Co., 1996], 118)

Ezra 6:4, 8 let the expenses be given out of the king’s house

It’s amazing enough that Cyrus allowed the Jews to return to Jerusalem, even more so that he allowed them to rebuild their temple.  But what is most remarkable, is that Cyrus was willing to pay for the construction out of his own pocket.  Some of the money came from the communities around Judea as well.  Josephus tells us that Cyrus wrote to “the rulers and governors that were in the neighborhood of their country of Judea, that they should contribute to them gold and silver for the building of the temple, and, besides that, beasts for their sacrifices.” (Antiquities of the Jews, Book XI, 1:2)  The neighbors were the Samaritans.  How did they feel about contributing to the Temple Fund?  You can imagine. “Whatsoever… they were enjoined to pay the Jews by the king’s order out of their tributes… they would not pay it.” (ibid, Book XI, 4:9)

Darius renews Cyrus decree that the Samaritans help, commanding “forthwith [that] expenses be given unto these men… of the kings goods, even of the tribute beyond the river,” (v. 8) meaning taxes collected from the people west of the Euphrates River.

Ezra 6:14 the elders of the Jews builded, and they prospered through the prophesying of Haggai the prophet and Zechariah

This is one of the few instances in which the Jews followed their prophets as the Lord wanted them to.  The return from Babylon really was a chance for this small remnant of Jews to hit the reset button—to start over according to the will of God and the Law of Moses.  All they had to do was follow God, the Mosiac Law, and the counsel of their prophets to receive the blessings of a prosperity according to the famous promise, “inasmuch as ye shall keep my commandments ye shall prosper in the land” (2 Ne. 1:20).  The promise is—when prophets prophesy—the people prosper.

What was the object of building a temple in the days of Solomon? What was the object of rebuilding it after its destruction by Nebuchadnezzar? Why was it that Ezra and the Jews who were with him in Babylonish captivity were strengthened to go forth to rebuild the temple of God at Jerusalem? (Ezra 3:1-13; Ezra 6:1-22) We read in the Scriptures that God's blessing rested upon them. Their enemies, it is true, harassed them and did all in their power to check their labors, but nevertheless they were exceedingly blessed, and God accepted their work and bestowed choice and peculiar blessings upon them. (Journal of Discourses, 14:126)

Ezra 6:15 this house was finished… in the sixth year of the reign of Darius

Once the Jews received royal approval the second time from the Persian capital, the work proceeded quickly.  According to the Bible, it took 4 years to finish it off, from the 2nd to the 6th year of Darius.  Josephus says it took seven—from the 2nd year to the 9th year. (Antiquities, XI, 4:7)  Both agree that it was the last month of the year—March by our calendar—Josephus says it was the 23rd day of the month.  By that chronology, we can see that the temple was completed just in time for an early April dedication. 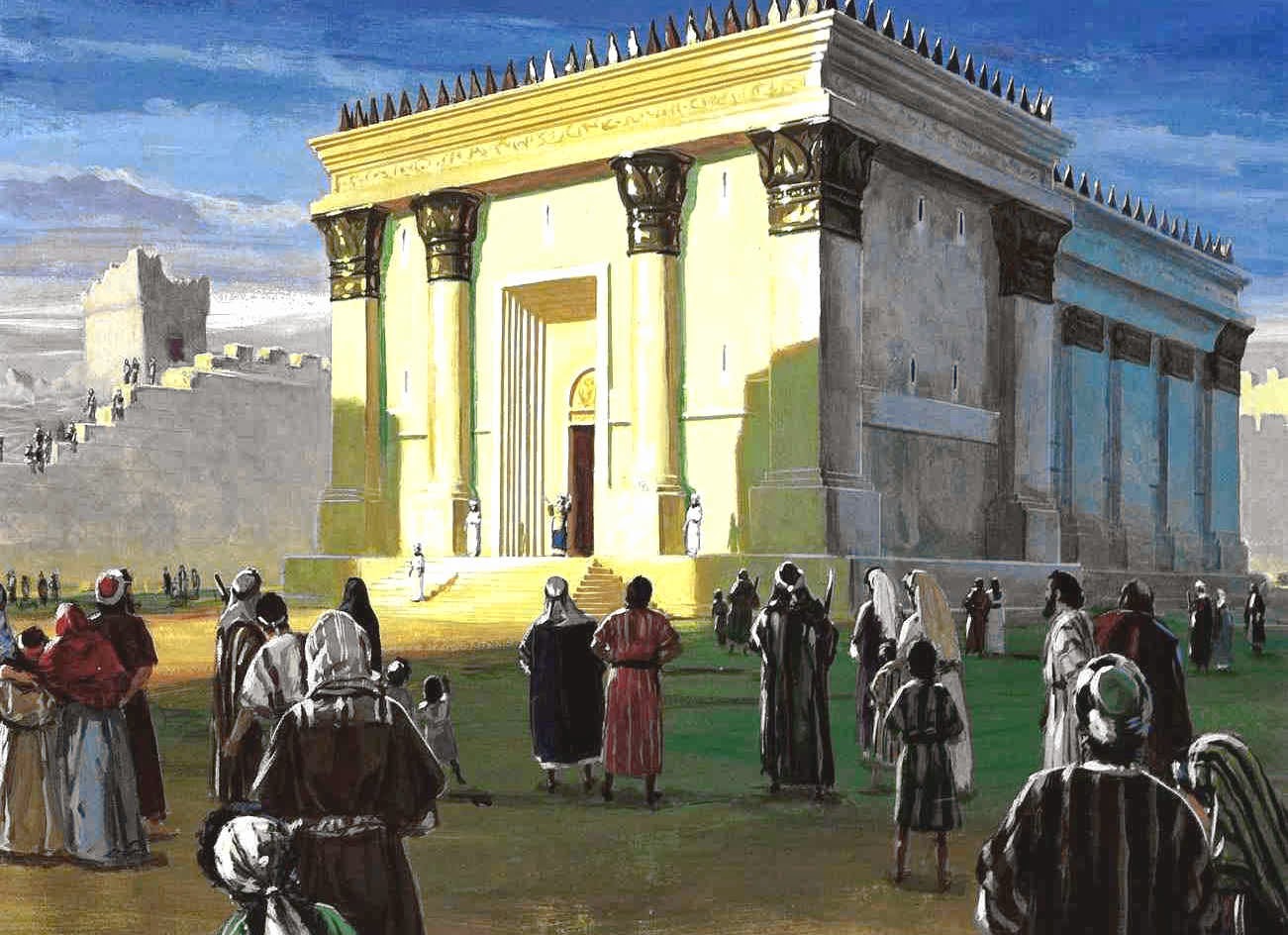 Ezra 6:16-22 the children of Israel… kept the dedication of this house of God with joy

Three great feasts were kept in Jerusalem in Jesus’ day, 1) the Passover, 2) the Feast of Tabernacles, and 3) the Feast of Weeks (Pentecost).  For the Latter-day Saints’ dedication of the Kirtland temple in April of 1836, there was a Pentecostal outpouring of the Spirit.  For the Jews’ dedication of the Zerubbabel Temple in April of BC 520, they celebrated with a Passover celebration of joy. They “kept the feast of unleavened bread seven days with joy: for the Lord had made them joyful” (v. 22).

“At the Feast of Tabernacles, which celebrated the Lord’s deliverance of Israel into the promised land, people chanted the words of Psalm 118 and waved palm branches. At the Lord’s triumphal entry into Jerusalem, the multitudes cried “Hosanna” and spread palm branches for Jesus to ride upon, thus demonstrating their understanding that Jesus was the same Lord who had delivered Israel anciently (Ps. 118:25–26; Matt. 21:9, 15; Mark 11:9–10; John 12:13). These people recognized Christ as the long-awaited Messiah. The word Hosanna has become a celebration of the Messiah in all ages (1 Ne. 11:6; 3 Ne. 11:14–17). The hosanna shout was included in the dedication of the Kirtland Temple (D&C 109:79) and is now a part of the dedication of modern temples.” (https://mormonwoman.org/2014/09/21/about-mormon-temples-and-temple-dedications)

Ann Madsen said, “one of the most spiritual weeks of my life [was one in] which we had attended the dedication of the Washington Temple. I remember it now with just as much joy as I felt then. I think of it often when I need to remember; when I need to feel the Holy Ghost telling me again that it was a high point in my life. We were with beloved friends who had also attended the dedication, and the relaxed atmosphere and perfect weather were a great catalyst for long gospel conversations—a continuation of the Spirit we had felt at the temple.” (Dawn Hall Anderson, Susette Fletcher Green, and Dlora Hall Dalton, eds., Clothed with Charity: Talks from the 1996 Women’s Conference [Salt Lake City: Deseret Book Co., 1997], 102 - 103)

Ezra 6:21 the children of Israel… were come again out of captivity

How appropriate this Passover celebration must have felt!  Ezra recognizes that the children of Israel were come again out of captivity.  Like that first deliverance—the one with the destroying angel and the Egyptian bondage—the Israelites were freed from their enemy.  Interestingly, both Egypt and Babylon have been used scripturally as figurative capitals of Satan’s kingdom.  The Israelites must be freed from spiritual Babylon and from spiritual Egypt. Consider how perfectly, this passage from the D&C fits this Passover celebration, “let them who be of Judah flee unto Jerusalem, unto the mountains of the Lord’s house.  Go ye out from among the nations, even from Babylon, from the midst of wickedness, which is spiritual Babylon.” (D&C 133:14).  The remnant who left with Zerubbabel had done just what the Lord commanded the saints 2368 years later—in 1831—they had heeded the call to flee to Jerusalem and to Jerusalem’s temple.  They had left the nations of wickedness and spiritual Babylon.  There were many Jews who remained in Babylon under Persian rule.  Life was good.  Why leave? They had the opportunity to join Zerubbabel but didn’t.  Others would have the opportunity to join Ezra when he brought another migratory party to Jerusalem.  But some won’t leave Babylon.  They may have the blood of Israel running through their veins, but they won’t go.

Let’s consider the similarities between the Israelite Exodus from Egypt and the Jewish exodus from Babylon:

The call now is to all men, Jew and Gentile alike: "Go ye out from among the nations, even from Babylon, from the midst of wickedness, which is spiritual Babylon." There is a great key hidden in these words. The gathering is both temporal and spiritual. Israel gathers spiritually by joining the Church; she gathers temporally by assembling where church congregations are found. The great issue is one of leaving Babylon, leaving the world, leaving wickedness; it is one of becoming pure in heart so as to be part of Zion. (The Millennial Messiah: The Second Coming of the Son of Man [Salt Lake City: Deseret Book Co., 1982], 292)