Daniel 2:2 call the magicians, and the astrologers, and the sorcerers, and the Chaldeans, for to shew the king his dreams
"Several instances are recorded in the Bible in which the future was made known by dreams, and the interpretation of dreams was sometimes an important part of the prophet's mission. Dreams in all ages have been believed in as affording indications of the future. In ancient Greece it was believed that dreams came from the great Jupiter, the king of gods. In ancient Egypt and Babylon, the interpretation of the monarch's dreams was an important state office, and was entrusted to a college of wise men. In consulting the Greek and Roman oracles, it was common, after performing sacred rites, to sleep in the temple, so that the information desired might be made known in dreams. Ancient philosophers wrote treatises upon the interpretation of dreams, and even Bacon seems to have believed that something might be learned from them. In modern times, however, very little attention is given to dreams, and they are generally dismissed from the mind with only a passing thought. The popular saying, 'As idle as a dream,' well expresses the sentiment of people generally in regard to this kind of phenomenon. This popular estimate of the nature of dreams is undoubtedly a just one as regards dreams generally. Yet it is possible that there may be exceptions. Some dreams may have a meaning which it is important that the dreamer should interpret aright, and understand its import." (Contributor, vol. 3 (October 1881-September 1882), Vol. Iii. May, 1882. No. 8. 254.)
Daniel 2:28 there is a God in heaven that revealeth secrets
George Teasdale
Every member of the Church of Christ has a right to knowledge, light and intelligence, and to know that the doctrine of Christ is true, by the revelations of Almighty God. We know that the Lord has established His Church upon the rock of revelation, and we know, as Daniel of old knew, that there is a God in heaven that revealeth secrets. We know that the spirit of prophecy is in the Church, because we are continually hearing prophecies and seeing them fulfilled. (Conference Report, April 1902, Morning Session 66 - 67)
Daniel 2:30 this secret is not revealed to me for any wisdom that I have
True servants of the Lord are always careful to give credit where credit is due; they wouldn't dare take credit for the Lord's miracles. Daniel understood this and exemplified it perfectly.
Brigham Young
Men talk about what has been accomplished under my direction, and attribute it to my wisdom and ability; but it is all by the power of God, and by intelligence received from him. . . .What I know concerning God, concerning the earth, concerning government, I received from the heavens, not alone through my natural ability and I give God the glory and the praise. (Discourses of Brigham Young, 1926 ed., p. 664)
Wilford Woodruff
I have always had to give God the glory for everything good that has happened to me; for I have realized by what power it came. (Howard W. Hunter, That We Might Have Joy [Salt Lake City: Deseret Book Co., 1994], 181)
Joseph F. Smith
I am not praising myself; I am not the one worthy of praise. I am praising the Lord; I am giving him the credit; the credit belongs to him. Let us get that spirit; let us teach it to our children. (James R. Clark, comp., Messages of the First Presidency of The Church of Jesus Christ of Latter-day Saints, 6 vols. (Salt Lake City: Bookcraft, 1965-75), 5: 93)
Daniel 2:32 This image's head was of fine gold, his breast and his arms of silver... 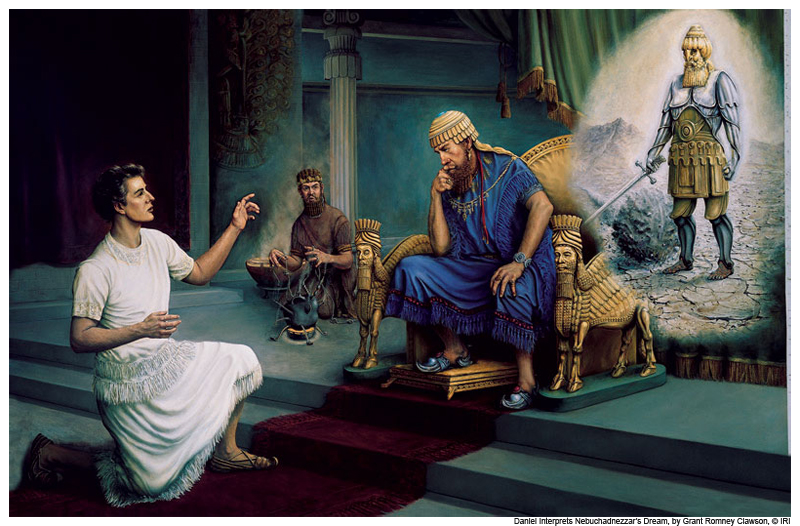 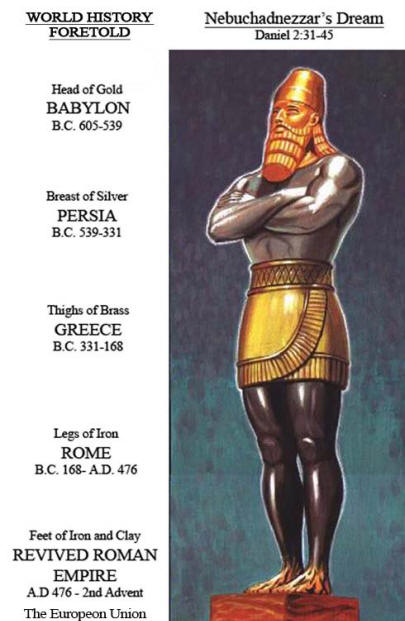