Reading the vision chapters of Zechariah is like reading Revelation and Daniel.  The imagery seems to be almost psychedelic.  Those prophets who see into heaven see things which seem strange to us; “as the heavens are higher than the earth, so are my ways higher than your ways, and my thoughts than your thoughts” (Isa. 55:9).  So, in Zechariah 5 we have women with stork’s wings; in Revelation, there are locusts with the faces of men and the hair of women (Rev. 9:7-8); and in Daniel, there was a lion with eagle’s wings (Dan. 7:4).  Apparently, wings and faces and body parts are interchangeable in heaven.  Like playing Mr. Potato Head with the arms, legs and torsos of men, lions, eagles, goats, rams, bears, and locusts, etc. That is how you come up with “a beast… having seven heads and ten horns… [with] the feet of a bear… the mouth of a lion… [and shaped] like unto a leopard.” (Rev. 13:1-2)

Why the crazy imagery?  We are just trying to read our scriptures and get something useful out of them, so why does this have to be so confusing?  Well, Joseph Smith helps us to interpret these types of visions, explaining for instance that wings “are a representation of power, to move, to act, etc.” (D&C 77:4).  Also, the angelic tour guides have given us explanations as well.  It seems that one of the purposes of these difficult passages is to test our faith.  Do we have the energy and the willpower to try and understand the mysteries?

When the prophets speak of seeing beasts in their visions, they mean that they saw the images, they being types to represent certain things. At the same time they received the interpretation as to what those images or types were designed to represent. I make this broad declaration, that whenever God gives a vision of an image, or beast, or figure of any kind, He always holds Himself responsible to give a revelation or interpretation of the meaning thereof, otherwise we are not responsible or accountable for our belief in it. Don't be afraid of being damned for not knowing the meaning of a vision or figure, if God has not given a revelation or interpretation of the subject. (Teachings of the Prophet Joseph Smith, 291)

Oh, ye elders of Israel… Declare the first principles, and let mysteries alone, lest ye be overthrown.  Never meddle with the visions of beasts and subjects you do not understand… preach those things the Lord has told you to preach about—repentance and baptism for the remission of sins. (Teachings of the Prophet Joseph Smith, 292)

We should not be teaching investigators about the “flying roll” that Zechariah saw in vision.  Still, some of the most faithful saints want to know everything they can about heaven before they get there.  So here we go!

Lest ye imagine Zechariah saw a flying eggroll from your favorite Chinese Restaurant, the roll is better understood as a rolled up scroll—a book—like the one given to Ezekiel to eat, “open thy mouth, and eat that I give thee.  And when I looked, behold, an hand was sent unto me; and, lo, a roll of a book was therein… and there was written therein lamentations, and mourning, and woe.” (Ezek. 2:8-10) We remember the book which Lehi saw, that it contained prophecies of destruction for Jerusalem (1 Ne. 1:11) and the book that John ate in Revelation (Rev. 10:8-10) representing a mission he was to perform.

The angel tells us exactly what is written on this roll, “This is the curse that goeth forth over the face of the whole earth.”  With the wings, the book may travel the climes of the entire earth.  The representation means that this curse is not just for Jerusalem but for all peoples on either side of the Euphrates River.  It isn’t a message just for Zechariah and his small band of believers; the curse applies to all nations, kindreds, tongues, and people. 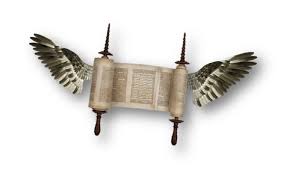 Second, this scripture follows the principle found in D&C 130, “when we obtain any blessing from God…” (D&C 130:21).  Only, in this case, the converse is true, “When we obtain any cursing from God, it is by disobedience to that law upon which it is predicated.”  Therefore, in this case, the roll contains the foreordained punishment for thieves and those who “sweareth falsely by my name.”  They have broken the law and are to receive the punishment predicated for that sin. Their homes, whether made of stone or of timber, will be consumed.

In order to avoid swearing falsely by God’s name, simply follow the advice the Savior gave, “Swear not at all; neither by heaven; for it is God’s throne: nor by the earth; for it is his footstool: neither by Jerusalem; for it is the city of the great King.  Neither shalt thou swear by thy head, because thou canst not make one hair white or black.  But let your communication be, Yea, yea; Nay, nay: for whatsoever is more than these cometh of evil.” (Matt. 5:33-37)

Zechariah 5:6-11 The vision of the women with stork’s wings 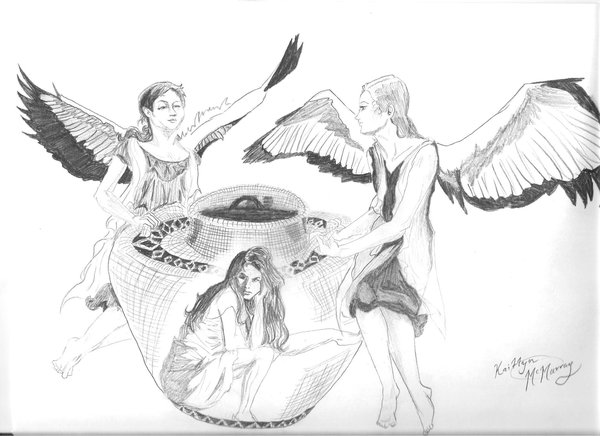 An ephah is a measurement of dry grain, like a bushel.  In this case, Zechariah sees a basket large enough to contain an ephah of grain.  The ephah represents commerce, but it also represents the evil, dishonest ways in which mankind seeks wealth and deals falsely with his brother. It is related to the imagery of the first part of the chapter—thieves who will certainly be punished—are like the merchants of Babylon who have stolen from the poor to make themselves rich.

Their wealth will perish with them.  That is why the imagery includes a talent of lead.  They have spent their days seeking nothing but gold but in the end, lead will be their reward.  The lead is not a blessing but a burden which must be placed in the basket and carried by the women with stork’s wings.  A talent weighs about 75 pounds so the women are represented with very large wings so that they can lift the heavy burden of the materialism of Babylon.

But why is there a woman inside the ephah?  Consider what this might mean?  The commodity for sale is not wheat or barley.  Doesn’t it suggest that sex sells and the proceeds thereof build up Satan’s kingdom both figuratively and literally?  How many have made themselves rich by the “sex sells” mantra?  This is the wickedness of the world and the foundation thereof.

And where are they going?  Where is the land of Shinar? “Shinar is the term used in the Hebrew Bible to represent the general region of Mesopotamia… as a general synonym for Babylonia.” (https://en.wikipedia.org/wiki/Shinar)  In Zechariah’s day, Babylon had been conquered by the Persians, so the term Babylon is not used to represent the capital of wickedness; that would be an anachronism.  Shinar is used instead to represent the seat of Satan’s power in the region of Babylon.  It will be established there in Shinar “and set there upon her own base” (v. 11) until the Lord comes again to destroy the world and the wickedness thereof.

The woman represented reminds us of similar scenes seen by John the Revelator.  John saw, “the woman… arrayed in purple and scarlet… full of abominations and filthiness…. Drunken with the blood of the saints, and with the blood of the martyrs of Jesus” (Rev. 17:4-6).  Babylon must be represented as a woman with whom “the kings of the earth have committed fornication.”  We talked about how the ephah represents commerce.  In Revelation, the theme is repeated; the merchants are the ones who weep over the destruction of Babylon.  She was their daughter, “the merchants of the earth shall weep and mourn over her… and the fruits that thy soul lusted after are departed from thee… For in one hour so great riches is come to nought” (Rev. 18: 11-17) 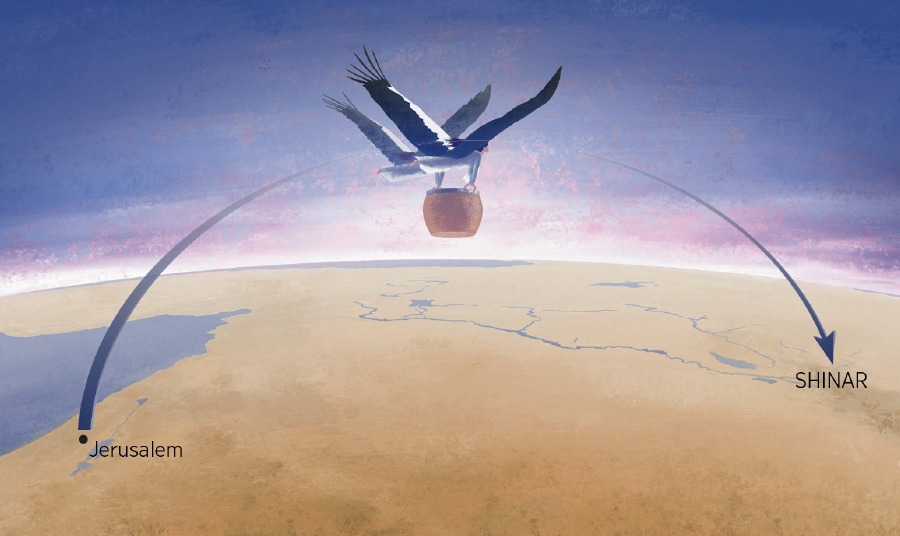