Zechariah was likely born in Babylon during the captivity that started with Nebuchadnezzar’s destruction of Jerusalem in about 589 BC.  As a youth, he had never seen Jerusalem, nor the temple, nor ever witnessed an animal sacrifice, even though he was a priest of the lineage of Levi (Neh. 12:1).  He had been raised by Jewish parents in the Babylonian Capital that had been conquered by yet another regional power—the Persians in 539 BC.  Zechariah was a witness to this change of power. He was a generation younger than Ezekiel, Daniel, Shadrach, Meshach, and Abed-nego.

The Persians were friendly to the Jews.  After conquering Babylon, Cyrus the Great, established a huge empire and wrote a decree that the Jews could return to Jerusalem and rebuild the Temple (Ezra 1). The same year, Zerubbabel led a group of about 42,000 Jews and others back to Judea (Ezra 2:64).  Zechariah was one of these first pioneers (Neh. 12:16).  Within a year, they had begun work on the Temple, trying to re-establish the practice of the Law of Moses among the people.  After several years, their work on the temple was halted by the Samaritans, who convinced Cyrus’ successor that letting the Jews rebuild their temple and their city was a bad idea (Ezra 4).

Zechariah, along with Haggai, were called as prophets with the specific mission to encourage the people to finish the Temple construction.  Jeremiah had prophesied that the Jewish captivity would last 70 years (Jer. 29:10).  When Zechariah is called by the Lord, the 70 years are up (Zech. 1:12), and the Lord has decided that the construction of His Temple must resume.

Zechariah is categorized as one of the minor Old Testament Prophets, but he is one of the most important “minor” prophets we have.  He describes the scene in Jerusalem at the time of the Second Coming with unparalleled clarity (chapters 12-14). His message is Messianic and apocalyptic. His prophecies begin with rebuilding the Second Temple at the very nadir of Jewish history and end with climactic return of the Lord of Hosts standing on the Mount of Olives.  His mission was to get the Second Temple under construction again, but his vision extended to the Millennial Temple in Jerusalem and its redemption/acceptance before the Lord.

“The book of Zechariah has more Messianic prophecies than any of the other 11 (minor) prophets. . . . The prophet Zechariah saw the meridian of time and the mission of the Lord Jesus Christ. His prophecies extended to the final winding-up scenes in Jerusalem and the coming of the great day of the Lord. Zechariah has left us a challenging text to study and the Lord has confirmed his prophecies in the Doctrine and Covenants.” (LDS Church News, 1990, 01/06/90)

“According to his predictions the nations will gather and lay siege to Jerusalem. Part of the city will fall, with dire consequences to its inhabitants, when a great earthquake will come, the Mount of Olives will cleave in twain, and the persecuted people will flee into this valley for safety. At that particular time will the Savior come as their Deliverer and show them his hands and his feet. They will look upon him and ask him where he received his wounds, and he will tell them they were received in the house of his friends—he is Jesus Christ, their Redeemer.

“At that time shall come the redemption of the Jews. Jerusalem shall then be rebuilt and the promises that it shall become a holy city will be fulfilled" (Doctrines of Salvation, 3:46-47).

Zech 1:1 in the second year of Darius, came the word of the Lord unto Zechariah

The second year of Darius, King of the Persian Empire, would have been about 519 BC, 70 years after the Jews last king Zedekiah lost the city, his sons, and his eyes (Jer. 39:6-7).  The Lord needs to upend the status quo.  The Samaritans have halted construction of the Temple and the Lord is not pleased.  Zechariah and Haggai are the prophets called to get things rolling again.

Zech 1:2 the Lord hath been sore displeased with your fathers

This is the same message as Jeremiah, Ezekiel, Lehi, etc.  The Jews had been disobedient; they had broken the covenant and reaped the reward.  The difference now is that the Jews can see the punishment.  In Jeremiah’s day, the people couldn’t fathom what was going to happen to them.  In Zechariah’s day, it was a reality:  the city was destroyed, the Temple ransacked, and the nation displaced throughout the Persian Empire.  Zechariah must not let the Jews of his days follow in their fathers’ footsteps.

Zech 1:3 Turn ye unto me…and I will turn unto you

This phrase, “Turn ye unto me,” is the Old Testament version of the New Testament phrase, “Come, follow me.”  The Jews had their backs to the Lord; God is calling them back hoping to embrace them like the father of the prodigal.

The Book of Mormon version is:  “if ye will turn to the Lord with full purpose of heart, and put your trust in him, and serve him with all diligence of mind, if ye do this, he will, according to his own will and pleasure, deliver you” (Mosiah 7:33)

The Lord will not deny you nor turn you away. The answers to your prayers may not be dramatic; they may not be readily understood or even appreciated. But the time will come when you will know that you have been blessed. (Ensign, June 1989, 74)

Your fathers are dead, but my word is eternal.  If your fathers came back from the dead, what would they say?  They would say that I, the Lord, dealt with them exactly according to my word given through the prophets over the centuries. They would say they got what they deserved.  They would warn you to do better than they have been.

Now this vision seems a little difficult to understand, but it’s not.  Let’s take it piece by piece. Zechariah has a vision—one of those great visions where you are escorted by an angel who answers all your questions (see 1 Ne. 11).  He is shown a valley with some men on horseback, among the myrtle trees. The angel tells us who they are, “These are they whom the Lord hath sent to walk to and fro through the earth.” (v. 10)

What does that mean? Does the Lord ever send out messengers to assess what is going on?  Have you ever heard the phrase, “Send Peter, James, and John down to the man Adam in the Garden of Eden. Assess conditions there, and see if he has been faithful…”? Well, this is a return and report moment.  Jehovah and a company of other angels are searching the earth to assess conditions there. They are on horseback to represent their power to move (compare D&C 77:4) and travel large distances in a short time.  The representation of surveyors on horseback would make sense to Zechariah.  Now what do they see?

Zechariah doesn’t tell us in full, but the Persian Empire is ruling the known world.  They have magnanimous policies of economics and social tolerance that lend to prosperity and peace.  That is what the angels on horseback see when they assess conditions on the earth. By worldly standards, everything is going great.  By the Lord’s standards, there is a big problem.  His scattered sheep have no home of their own. They have no temple.  They have no organization to their priesthood.  It is every man for himself in a Gentile world.

The horsemen give their report to the angel of the Lord (Jehovah) standing among the myrtle trees, “We have walked to and fro through the earth, and, behold, all the earth sitteth still, and is at rest.” (v. 11) Sounds like good news, but Jehovah is not pleased with the report.

He then asks Elohim, “how long wilt thou NOT have mercy on Jerusalem and on the cities of Judah?”  Jehovah asks Elohim if it isn’t time for Jerusalem to be redeemed and the temple finished.  The answer came from Elohim, “good words and comfortable words,” (v. 13) meaning “Yes, the time has come.”

Zechariah’s escort then gives him his prophetic mission; the message is “cry unto the people.  Tell them the Lord of hosts is jealous for Jerusalem and for Zion with a great jealousy… the Lord shall yet comfort Zion, and shall yet choose Jerusalem” (v. 14).

Great news for Zechariah!  In a short vision, he has been escorted by an angel, seen other angels surveying conditions on the earth, their report to Jehovah, and a conversation between Jehovah and Elohim about the redemption of Zion.  It is really quite a remarkable little vision.

What Zechariah saw would have been a combination of the images below.  The cartoon includes all the participants, Zechariah, his escort, Jehovah, and the angels, and is therefore more doctrinally correct. However, in the picture, Jehovah, the most important horseman, is more appropriately represented. 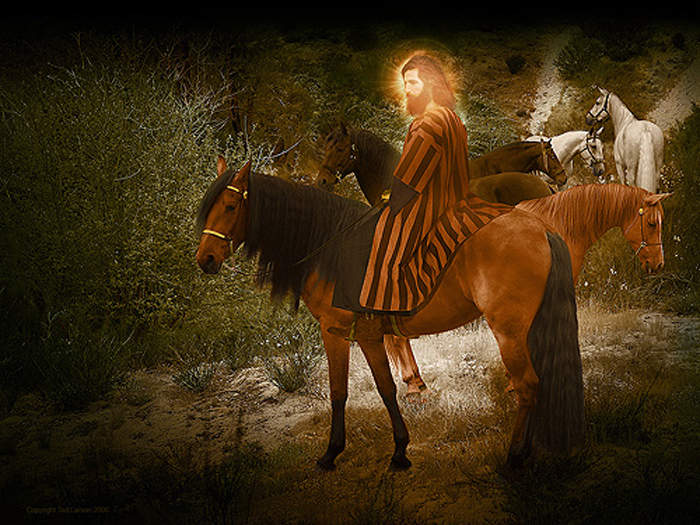 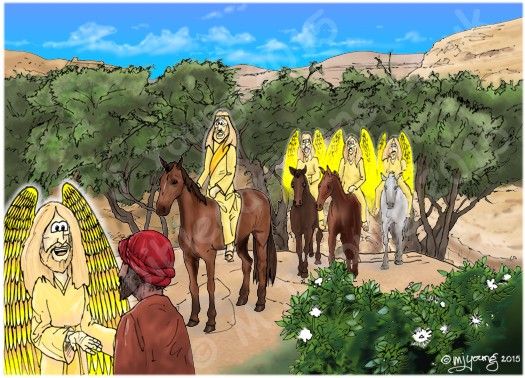 Zech 1:16 I am returned to Jerusalem with mercies: my house shall be built in it

The vision is circa 519 BC.  Fast forward 552 years—the voice of Jehovah has returned to Jerusalem as Jesus, with mercies to teach in the house He wanted built so long ago.  Near the end of his earthly ministry, Jesus entered Jerusalem on a white colt (representing humility) instead of a red horse.  Jesus casts out all them that bought and sold in the temple, healed the blind and the lame so that the people exclaimed, “Hosanna to the Son of David” (Matt. 21:12-16). “My house shall be called the house of prayer; but ye have made it a den of thieves.”  (Matt. 21:13)  During his ministry, Jesus was jealous for Jerusalem. Building, defending, and purifying his Father’s house was always his priority, but it was His house as well.  As we await the third temple in Jerusalem, we can only imagine the jealousy of Jehovah, or the jealousy of Jesus, for his Father’s house to be built and cleansed yet again on the temple mount. When he comes again, it will be on a white horse with a vesture red like blood (Rev. 19:11-13). After exacting vengeance upon the wicked, he will return triumphantly to the House of the Lord to rule and reign for a thousand years of peace and joy.

Zech 1:17 the Lord shall yet comfort Zion

I feel to cry mightily unto the Lord that all things, which have happened may work together for good; yea, I feel to say, O Lord, let Zion be comforted, let her waste places be built up and established an hundred fold; let Thy Saints come unto Zion out of every nation; let her be exalted to the third heavens, and let Thy judgment be sent forth unto victory; and after this great tribulation, let Thy blessing fall upon Thy people. (History of the Church, 1:407-409)

Zech 1:18-19 these are the horns which have scattered Judah, Israel, and Jerusalem

“The four horns are four nations that scattered Israel and the Jews. The first was Shalmanesser, king of Assyria, that carried the ten tribes into captivity. The second, Nebuchadnazzar, who destroyed the city of Jerusalem and carried the Jews into captivity. The third was Antiochus Epiphanes, king of the Greeks, who, after their restoration from Babylon, nearly destroyed the city, and carried six hundred thousand Jews into captivity. The fourth and last, was their destruction and captivity by the Romans. The four carpenters are likewise four nations that will be raised up for their restoration.

“These four horns have scattered the Jews.  The Lord intends to gather them back.  Carpenters, measuring a line, represent angels of God measuring to rebuild the Temple, the gathering point for the refugees.” (Latter-day Saints' Millennial Star, vol. 7 (January 1846-June 1846), No. 2. January 15, 1846. Vol. Vii. 25.)

Zech. 1:21  these are come to fray them, to cast out the horns of the Gentiles which lifted up their horn over the land of Judah.