The account of Moses miraculously producing water in the desert by striking his rod on the rock of Horeb appears in Exodus 17 and again in Numbers 20.  The accounts aren’t exactly the same, but both accounts seem to speak of the same event.  Rather than treat each text differently, we will examine them as a single event, meshing the two accounts.  The text in blue comes from Numbers 20:1-12.  The text in red comes from Exodus 17:1-7.
Then came the children of Israel, even the whole congregation, into the desert of Zin in the first month (from the wilderness of Sin): and the people abode in Kadesh; (and pitched in Rephidim) and Miriam died there, and was buried there.
2 And there was no water for the congregation: and they gathered themselves together against Moses and against Aaron.
2 Wherefore the people did chide with Moses, and said, Give us water that we may drink. And Moses said unto them, Why chide ye with me? wherefore do ye tempt the LORD?
3 And the people thirsted there for water; and the people murmured against Moses, and said, Wherefore is this that thou hast brought us up out of Egypt, to kill us and our children and our cattle with thirst?
5 And wherefore have ye made us to come up out of Egypt, to bring us in unto this evil place? it is no place of seed, or of figs, or of vines, or of pomegranates; neither is there any water to drink.
6 And Moses and Aaron went from the presence of the assembly unto the door of the tabernacle of the congregation, and they fell upon their faces: and the glory of the LORD appeared unto them.
And Moses cried unto the LORD, saying, What shall I do unto this people? they be almost ready to stone me.
7 ¶ And the LORD spake unto Moses, saying,
8 Take the rod, wherewith thou smotest the river and gather thee of the elders of Israel; and Aaron thy brother, and go.
6 Behold, I will stand before thee there upon the rock in Horeb; and thou shalt smite the rock, and there shall come water out of it, that the people may drink. and speak ye unto the rock before their eyes; and it shall give forth his water, and thou shalt bring forth to them water out of the rock: so thou shalt give the congregation and their beasts drink.
9 And Moses took the rod from before the LORD, as he commanded him.
10 And Moses and Aaron gathered the congregation together before the rock, and he said unto them, Hear now, ye rebels; must we fetch you water out of this rock?
11 And Moses lifted up his hand, and with his rod he smote the rock twice: and the water came out abundantly, and the congregation drank, and their beasts also.
12 ¶ And the LORD spake unto Moses and Aaron, Because ye believed me not, to sanctify me in the eyes of the children of Israel, therefore ye shall not bring this congregation into the land which I have given them.
7 And he called the name of the place Massah, and Meribah, because of the chiding of the children of Israel, and because they tempted the LORD, saying, Is the LORD among us, or not?
We notice that these two accounts differ as to the location of the event and some of the details.  How could that be if Moses wrote both Exodus and Numbers?  Well, we should realize that the first five books of Moses were written by scribes years after the events. (The Jewish Study Bible, ed. by A Berlin & MZ Brettler [New York, Oxford University Press, 2nd ed., 2014], 133, 307)  This is a perfect example of two different scribes taking Moses’ records and including different details. This pattern, suggesting different scribal accounts, is repeated several times in Exodus and Numbers.  If you wonder what it would be like to read Moses’ original writings, read Moses 1.  Written in the first person, it is the only chapter in scripture which captures Moses’ firsthand account of his own experiences.
From this abbreviated account, we learn that Moses displeased God and was told he should not bring the children of Israel into the Promised Land.   While this instance of the Lord punishing his prophet is not unique in scripture (see Jonah and 1 Ne. 16), it is heartbreaking to see after all Moses had suffered.
Exodus 17:1 the children of Israel… pitched in Rephidim
Rephidim is “the last station before Sinai (Ex. 19:2; Num. 33:14-15) and, to judge from v. 6, near Sinai/Horeb.” (The Jewish Study Bible, ed. by A Berlin & MZ Brettler [New York, Oxford University Press, 2nd ed., 2014], 133)  Exodus 17 suggests this event happened within the first 2 years of their journeys, while the Numbers account suggests it occurred at a different time, near the end of the 40 years when Miriam dies, and at a different location called Kadesh.
Numbers 20:1 the people abode in Kadesh
“Kadesh, meaning ‘holy,’ is one site in the Israelites’ wilderness sojourn whose location is largely uncontested by scholars.  The area was the most permanent residence for the children of Israel and was probably their home for some thirty-eight of the fort years that they lived in the wilderness.  Blessed by a natural supply of water from a series of spring-fed lakes, Kadesh includes a spring that generates as much as forty cubic meters of water per hour.  Surrounded by the wilderness of Zin, the oasis of Kadesh could produce plenteous vegetation, including olive trees.  It is located about 150 miles from Egypt, 140 miles from Sinai, and 40 miles from Beersheba.” (Camille Fronk Olson, Women of the Old Testament, [SLC: Deseret Book, 2009], 104) 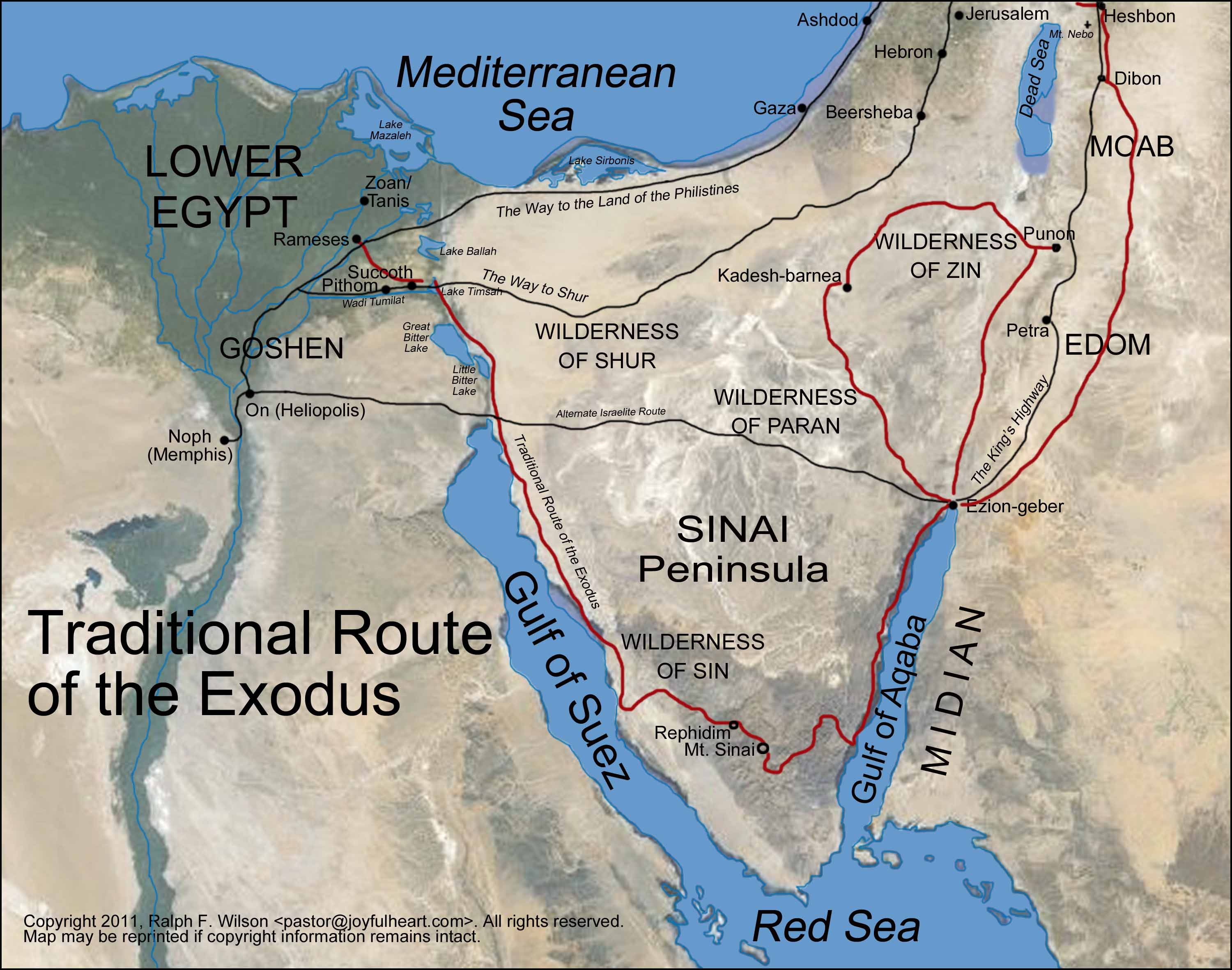 Numbers 20:1 and Miriam died there, and was buried there
“Jewish tradition relates that Miriam, Moses, and Aaron all died sinless (Ginzberg, Legends, 3:444).  Similarly, centuries later the prophet Micah remembered Miriam and her brothers as national heroes (Micah 6:3-4).  Miriam’s story is a gift. We can share in her victories as well as her shortcomings. Through the power of the Lord, she led her people in a song of praise and acknowledgment for His deliverance.  Likewise, through the power of the Lord, she received correction, rebirth, and forgiveness when she stumbled over God’s command to sustain and honor those called to lead her.  In both circumstances she reminds us that we owe all that we are and can be to the Lord.” (Camille Fronk Olson, Women of the Old Testament, [SLC: Deseret Book, 2009], 104)

Numbers 20:10 ye rebels, must we fetch you water out of this rock?