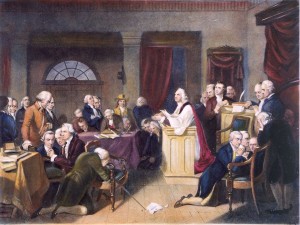 "The First Prayer in Congress" by T.H. Matteson 1848
Reverend Duché opened the second session on September 7th, 1774 with prayer. It was not a perfunctory prayer, but one that was a time of profound prayer. Opening the session he read the 35th Psalm, and then broke into extemporaneous prayer.
First Prayer of the Continental Congress, 1774
O Lord our Heavenly Father, high and mighty King of kings, and Lord of lords, who dost from thy throne behold all the dwellers on earth and reignest with power supreme and uncontrolled over all the Kingdoms, Empires and Governments; look down in mercy, we beseech Thee, on these our American States, who have fled to Thee from the rod of the oppressor and thrown themselves on Thy gracious protection, desiring to be henceforth dependent only on Thee. To Thee have they appealed for the righteousness of their cause; to Thee do they now look up for that countenance and support, which Thou alone canst give. Take them, therefore, Heavenly Father, under Thy nurturing care; give them wisdom in Council and valor in the field; defeat the malicious designs of our cruel adversaries; convince them of the unrighteousness of their Cause and if they persist in their sanguinary purposes, of own unerring justice, sounding in their hearts, constrain them to drop the weapons of war from their unnerved hands in the day of battle!
Be Thou present, O God of wisdom, and direct the councils of this honorable assembly; enable them to settle things on the best and surest foundation. That the scene of blood may be speedily closed; that order, harmony and peace may be effectually restored, and truth and justice, religion and piety, prevail and flourish amongst the people. Preserve the health of their bodies and vigor of their minds; shower down on them and the millions they here represent, such temporal blessings as Thou seest expedient for them in this world and crown them with everlasting glory in the world to come. All this we ask in the name and through the merits of Jesus Christ, Thy Son and our Savior.
Amen.
Reverend Jacob Duché
Rector of Christ Church of Philadelphia, Pennsylvania
September 7, 1774, 9 o'clock a.m.
The prayer had a profound effect on the delegates, as recounted by John Adams to his wife. Dr. Duché followed the psalm with ten minutes of spontaneous prayer asking God to support the American cause. Adams stated, "[Rev] Duche, unexpectedly to everybody, struck out into extemporaneous prayer which filled the bosom of every man present. I must confess I never heard a better prayer. . . .with such fervor, such ardor, earnestness and pathos, and in a language so elegant and sublime for America [and] for the Congress. . . .It has had an excellent effect upon everybody here." He went on to say, "I never saw a greater effect upon an audience. It seemed as if Heaven had ordained that Psalm to be read on the morning. . . .I must beg you to read that Psalm. . . [Read] the 35th Psalm to [your friends]. Read it to your father." One other delegate said he was "worth riding 100 miles to hear."
On July 4, 1776, Jacob Duché met with his Vestry to make a momentous decision. Just two days after the Continental Congress voted to "dissolve the connection" with Great Britain in what became known as the Declaration of Independence, the decision at hand was whether or not to pray for the royal family in the upcoming Sunday service. In the politically charged world of Philadelphia, the act of excluding prayers for King George was fraught with partisan labeling: are you a loyalist Tory or a rebel? The vestry decided "for the peace and well-being of the churches, to omit the said petitions." To this day, you can visit Christ Church and see the 1776 Prayer Book where the prayer has an ink line literally crossing out those prayers for the King. (http://acheritagegroup.org/blog/?p=340)