Jeremiah 20:2 Pashur smote Jeremiah the prophet, and put him in the stocks
Imagine being beaten and then spending the night in the stockade. What would you think about for the painful sleepless night? Jeremiah has recorded for us his thoughts while in the stocks (see v. 7-18). He thought, "every one mocketh me... But the Lord is with me... let me see thy vengeance on them... Cursed be the day wherein I was born... Wherefore came I forth out of the womb... to be consumed with shame?" He doesn't want to be a prophet anymore, but he can't help it because the word of the Lord was "as a burning fire shut up in by bones" so that being silent was more painful than the stocks, "I was weary with forbearing, and I could not stay." 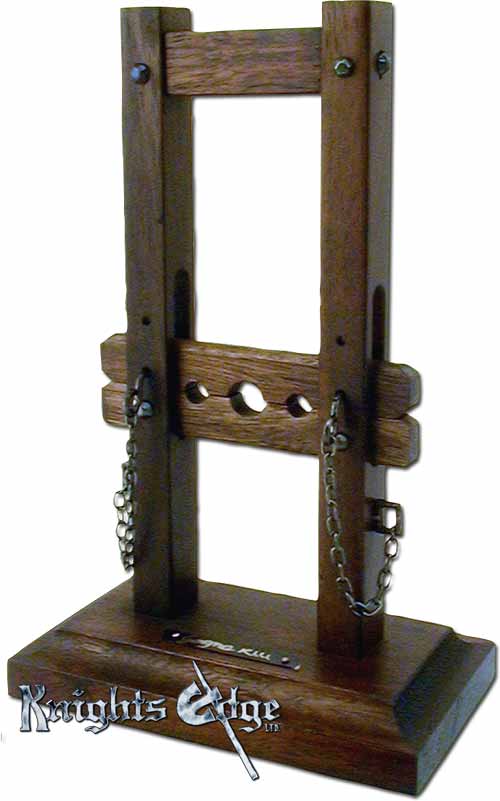 Jeremiah 20:6 thou, Pashur, and all that dwell in thine house shall go into captivity... and there thou shalt die
"Prophesying during the forty years preceding the fall of Jerusalem, [Jeremiah] watched the children of Israel adopt the immoral and unjust practices of other lands, building idols and burning their own children as sacrifices, rejecting the truth and honoring false prophets who assured them that all would be well.
"When Jeremiah denounced these practices, he was insulted and persecuted by kings, princes, priests, and the common people alike. Then the Lord revealed to Jeremiah that because Judah would not repent, Jerusalem would be destroyed and the people scattered. When Jerusalem finally fell, Jeremiah was taken into Egypt by a surviving part of the army of Judah where, according to one legend, he was ultimately martyred.
"Three important principles are exemplified in Jeremiah's struggle against the overwhelming evils of Jerusalem.
"First, Jeremiah continued to denounce evil even when there was no real chance that the people would repent. He told the inhabitants of Jerusalem that all the calamities that had been prophesied against them would come to pass because they had hardened their hearts and had not listened to the words of the Lord. Pashur, the chief governor of the temple, smote Jeremiah for saying this, and had him put in stocks. The next day Jeremiah, speaking for the Lord, said:
Thou, Pashur, ... shall go into captivity: and thou shalt come to Babylon, and there thou shalt die, and shalt be buried there, thou, and all thy friends, to whom thou has prophesied lies (Jer. 20:6).
"Jeremiah's denunciation would certainly not change Pashur, but Jeremiah knew that his duty was to condemn every form of evil. He was forthright and explicit in doing so.
"When we are confronted by pervasive evils such as drug abuse or immorality, and when most people seem indifferent to these sins, the situation may appear hopeless. But, as Jeremiah's example shows, even if we cannot remove evil, we must still resist it without compromise. Inactivity cannot be excused by the unlikelihood of success; we are required always to do our best. If we are valiant, the Lord will bless us with peace and joy, and we will fear no evil." (K. Codell Carter, "Dark Clouds of Trouble," Ensign, July 1980, 28-29)
Jeremiah 20:9 his word was in mine heart as a burning fire shut up in my bones
Brigham Young
When I came into the Church I had a wife, but in a very few months after I was baptized I lost her, and she left me two little girls. I gave away what I had, and I started to preach the Gospel. I was obliged to do it, for I felt as though my bones would consume within me if I did not, consequently I devoted my time to preaching. I traveled, toiled, labored and preached continually. My own brother Joseph, and myself, were together a good deal of the time, until we went to Kirtland, to see the Prophet, and the next year moved up. This is the way I commenced, and when I gathered with the Saints I was about as destitute as any man that ever gathered to the gathering place. (Journal of Discourses, 16:69)
Brigham Young
I was but a child, so far as public speaking and a knowledge of the world was concerned; but the Spirit of the Lord was upon me, and I felt as though my bones would consume within me unless I spoke to the people and told them what I had seen, heard and learned-what I had experienced and rejoiced in; and the first discourse I ever delivered I occupied over an hour. I opened my mouth and the Lord filled it; and from that time, wherever we traveled and preached, the people heard, received and rejoiced in the Gospel, and we baptized our thousands upon thousands. (Journal of Discourses, 13:211)
Brigham Young
[In my early days, often] I had been engaged preaching the Gospel, and the Spirit of God would rest down upon me to that degree that, if I did not open my mouth to preach to the people, it seemed as though my bones would consume within me, consequently I used to preach long and loud.
For forty-three years I have been more or less engaged preaching to the people. My talking organs are now pretty much exhausted, but my general health is good, even better than when I was a young man. I never felt better than I do at present. I have lungs enough to serve me to preach a hundred years... I came here to rest, to get away from much talking...
I sometimes feel that I can hardly desist from telling the Latter-day Saints how they should live, but my talking organs will not permit me to say as much as I wish to. (Journal of Discourses, 18:212, Aug. 15, 1876)
John Taylor
We want as Latter-day Saints to comprehend the position we occupy; and while God has conferred many great and precious privileges upon us, we want to appreciate them and honor them... We ought to be full of light and life and the power and spirit of the Living God and feel that we are messengers to the nations of the earth; we ought to feel the word of God burning like fire in our bones, feeling desirous to go and snatch men from the powers of darkness and the chains of corruption with which they are bound, and lead them in the paths of life. We ought to be prepared to go forth weeping, bearing precious seed that we might come back again rejoicing bringing our sheaves with us. (Journal of Discourses, 20:228)