Introduction
Has the anticipation been killing you?  We have been reading and studying Jeremiah forever it seems.  For decades he has been saying the Babylonians are coming to destroy the city!  While we shouldn’t relish the shedding of blood, we have been waiting a long time for this. Like waiting for the Messiah’s First Advent or end of the world, waiting for the destruction of Jerusalem has apocalyptic implications—at least for the Jews.  Finally, Jeremiah’s position is vindicated; finally his prophecies are fulfilled.  Nebuchadnezzar’s army finally sacks the city.
Rather than a detailed report of blood and gore, the scribe decides to tell the fate of three figures:  Zedekiah, Jeremiah, and Ebed-Melech.  Zedekiah represents the wicked either killed or brought under Babylonian rule.  Jeremiah represents the righteous Jews who are preserved by the Lord.  Ebed-Melech represents all Gentiles whose great faith provides protection from divine wrath.  The text is not so much a description of the battle, a lament for the loss of the temple, or a tally of the dead or captured; instead, it is the story of how the sacking of Jerusalem affected three men.  It is amazing how carefully the Lord orchestrates the perfect ending for each of these three characters amidst the utter chaos of an apocalyptic event. Notice the Lord’s attention to detail!
Jeremiah 29:2 in the eleventh year, in the fourth month… the city was broken up
The siege lasted 18 months.  The Babylonian forces were clearly superior but Jerusalem was protected by large walls and fanatic Jews.  The combination was able to keep the army at bay for quite some time.  It appears that Nebuchadnezzar was elsewhere at the time of the breach—in Riblah, where he would later meet captured Zedekiah.
“The besieging armies systematically broke down the walls of Jerusalem, and Nebuchadnezzar’s captain eventually ‘burnt the house of the Lord, and the king’s house, and all the houses of Jerusalem, and every great man’s house burnt he with fire’ (2 Kgs. 25:9; see also Jer. 52:13). Babylon thus earned undying opprobrium for having razed the nearly four-centuries-old Temple of God and leaving it in ruins.
“Excavations in the City of David and in today’s Jewish Quarter attest to the destruction in the 587-586 B.C. siege of Jerusalem: many arrowheads, a destroyed four-room house, a burnt room, and clay bullae (letter seals or stamps) baked hard by a great conflagration that swept over the whole city…
“As late as 1962 the most widely used textbook on biblical archaeology lamented that ‘from Jerusalem no archaeological evidence of the Babylonian destruction has been recovered.’ The excavations of Kathleen Kenyon and Yigal Shiloh make such a statement no longer true.  There is now considerable physical evidence of the fulfillment of Lehi’s and Jeremiah’s prophecies of the destruction of Jerusalem.” (David B. Galbraith, D. Kelly Ogden, Andrew C. Skinner, Jerusalem: The Eternal City [Salt Lake City: Deseret Book Co., 1996], 108-109)
In many different ways, the Lord saved the righteous.  Some He preserved as captives in Babylon (i.e. Daniel and Ezekiel); others he commanded to leave before the destruction came (Lehi and Nephi); while still others remained to the end, yet were still preserved from the sword (Jeremiah, Ebed-Melch, Mulek).  Nephi lamented the fate of the rest, “For behold I have workings in the spirit, which doth weary me even that all my joints are weak, for those who are at Jerusalem; for had not the Lord been merciful, to show unto me concerning them, even as he had prophets of old, I should have perished also” (1 Ne. 19:20).
Jeremiah 39:3 the princes of the king of Babylon came in, and sat in the middle gate
A walled city is basically a fortress.  There is no entrance or exit but by the gate.  During war, the gates were closed and heavily guarded.  Only friendly forces would be let in.  For the Babylonian nobles to sit in the middle gate was a slap in the face.  An intentional affront, the bravado of the gesture announced, “We have control of your city now!  We will decide who comes and goes.  We will rule this city as we wish.”
Like the rest of the tragedy, Jeremiah had warned them it would happen, “I will call all the families of the kingdoms of the north, saith the Lord; and they shall come, and they shall set every one his throne at the entering of the gates of Jerusalem” (Jer. 1:15).
Jeremiah 39:5 the Chaldeans’ army… overtook Zedekiah in the plains of Jericho: and… they brought him up to Nebuchadnezzar… to Riblah
Josephus
And when the city was taken about midnight, and the enemy's generals were entered into the temple, and when Zedekiah was sensible of it, he took his wives, and his children, and his captains, and his friends, and with them fled out of the city, through the fortified ditch, and through the desert; and when certain of the deserters had informed the Babylonians of this, at break of day, they made haste to pursue after Zedekiah, and overtook him not far from Jericho, and encompassed him about. But for those friends and captains of Zedekiah who had fled out of the city with him, when they saw their enemies near them, they left him, and dispersed themselves, some one way, and some another, and every one resolved to save himself; so the enemy took Zedekiah alive, when he was deserted by all but a few, with his children and his wives, and brought him to the king. (Antiquities of the Jews, Book X, 8:2)
Zedekiah’s escape route to Jericho was fairly predictable.  Jericho lies some 22 miles east of Jerusalem, but Nebuchadnezzar wasn’t close to the action. Rather, he was up in a town called Riblah, quite a ways to the north—even north of Damascus. 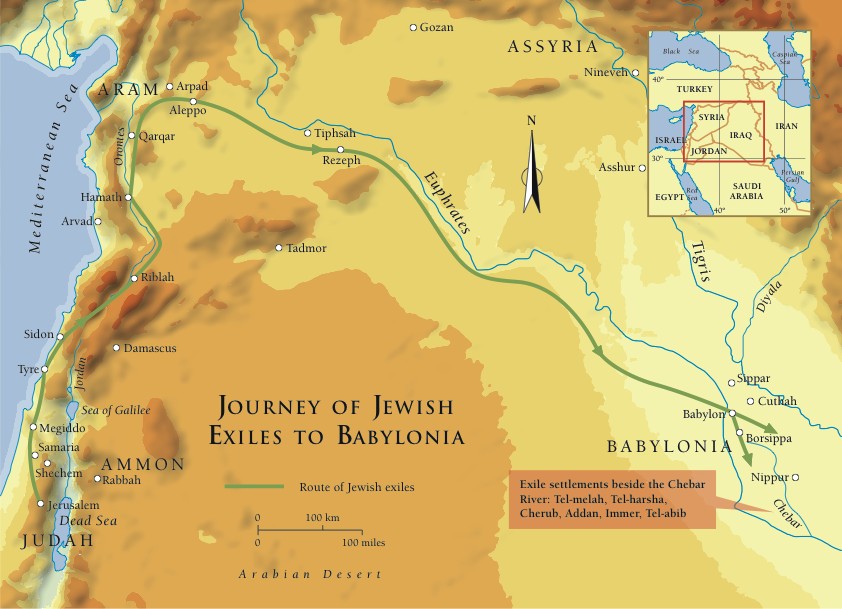