Introduction
These prophecies against Egypt might be snoozers at first glance.  It turns out that Jeremiah 46 is a very interesting little window into the history of one of the greatest civilizations ever.  What happened to the grandeur of Egypt?  What happened to the regional dominance, to the economic influence?  Does God care about the rise and fall of great civilizations?  Does He play a part in their ascent and destruction?
Jeremiah was the prophet of gloom and doom for Jerusalem, but his authority extended beyond Jewish borders.  Prophetic keys include the right and responsibility to warn the righteous and the wicked, Jew and Gentile, member and non-member.  The Lord reveals the fate of Egypt to the Hebrew prophet, and the news isn’t good. Verse 1-12 were likely given prior to the battle referenced as these verses read more like a history than a prophecy.  Likely, this section was given as part of the prophecies that were destroyed in the fire (Jer. 36:23-31) in the 5th year of Jehoiakim.  When ink hit the scroll in the rewriting of Jeremiah’s burned manuscript, the destruction of the Egyptian army at Carchemish was old news.  The next section, i.e. verses 13-26, were still to play out, and therefore read more like a foretelling type of prophecy.  But this isn’t apocalyptic stuff; the fulfillment would come in the prophet’s day and Jeremiah would be a personal witness (Jer. 42-44).
Jeremiah 46:1-2  Pharaoh-necho king of Egypt

Brooklyn Museum
“Necho II… was a king of the Twenty-sixth dynasty of Egypt (c. 610 BC – c. 595 BC). Necho undertook a number of construction projects across his kingdom.   In his reign, according to the Greek historian Herodotus (4.42), Necho II sent out an expedition of Phoenicians, which in three years sailed from the Red Sea around Africa to the mouth of the Nile…
“Necho played a significant role in the histories of the Neo-Assyrian Empire, the Neo-Babylonian Empire and the Kingdom of Judah. Necho II is most likely the pharaoh mentioned in several books of the Bible. The second campaign's aim of Necho's campaigns was Asiatic conquest, to contain the Westward advance of the Neo-Babylonian Empire, and cut off its trade route across the Euphrates. However, the Egyptians were defeated by the unexpected attack of the Babylonians and were eventually expelled from Syria.” (http://en.wikipedia.org/wiki/Necho_II)
Jeremiah 46:2 by the river Euphrates in Carchemish, which Nebuchadrezzar king of Babylon smote in the fourth year of Jehoiakim
“The Babylonian king was planning on reasserting his power in Syria. In 609 BC, King Nabopolassar (Nebuchadnezzar’s father) captured Kumukh, which cut off the Egyptian army, then based at Carchemish. Necho responded the following year by retaking Kumukh after a four-month siege, and executed the Babylonian garrison. Nabopolassar gathered another army, which camped at Qurumati on the Euphrates. However, Nabopolassar's poor health forced him to return to Babylon in 605 BC. In response, in 606 BC the Egyptians attacked the leaderless Babylonians (probably then led by the crown prince Nebuchadrezzar) who fled their position.
“At this point, the aged Nabopolassar, passed command of the army to his son Nebuchadnezzar II, who led them to a decisive victory over the Egyptians at Carchemish, and pursued the fleeing survivors to Hamath. Necho's dream of restoring the Egyptian Empire in the Middle East as had occurred under the New Kingdom was destroyed as Nebuchadnezzar conquered Egyptian territory from the Euphrates to the Brook of Egypt (Jeremiah 46:2; 2 Kings 23:29) down to Judea. Although Nebuchadnezzar spent many years in his new conquests on continuous pacification campaigns, Necho was unable to recover any significant part of his lost territories. For example, when Ashkalon rose in revolt, despite repeated pleas the Egyptians sent no help, and were barely able to repel a Babylonian attack on their eastern border in 601 BC.” (http://en.wikipedia.org/wiki/Necho_II)
Jeremiah 46:5-6 their mighty ones are beaten down, and are fled apace, and look not back
Necho II was beaten terribly by Nebuchadnezzar at Carchemish in 605 BC.  Pharaoh had filled his armies mostly with mercenaries from surrounding countries.  Certainly, Necho had delusions of grandeur that were thoroughly smashed by the Babylonians.  The slaughter continued from Carchemish to Hamath—a distance of 288 kilometers.  The Lord describes the humiliation and fear of the retreating armies. 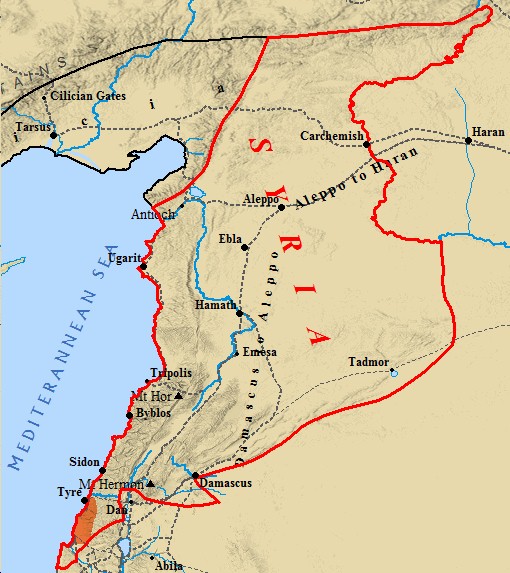