Jeremiah 34:1 The word which came… when Nebuchadnezzar… fought against Jerusalem
Again, Jerusalem is under Babylonian siege for an 18 month span, from 10th month of the 9th year of Zedekiah to the 4th month of the 11th year of Zedekiah.  During this time period, probably the last few months, comes this prophecy from Jeremiah.  Let’s assume that the city has been under siege for about a year.  It makes sense that the Jews are starting to get nervous.  They are working hard to keep the Babylonians outside the walls of the city but they know that they can’t hold them off forever.  The soldiers and the king must be wondering, “What is going to happen to us when the Babylonians breach the walls?”
This prophecy is Lord giving an answer to Zedekiah, “they will burn the city and take you captive to Babylon.”
Jeremiah 34:5 But thou shalt die in peace: and with the burnings of thy fathers, the former kings which were before thee
Death would be too merciful for Zedekiah.  When the Lord says he will “die in peace,” He means he will not die a violent death at the hands of the Babylonians.  Such an end would be too good for him.  Instead, the Lord is going to preserve him in a state of blindness so that he can think on the tragedy that occurred during his reign as king.  He would be the last king of Israel until Herod (and Herod doesn’t really count because he was subservient to the Romans).  Without sight to distract him, he is preserved to feel “the burnings of thy fathers, the former kings.”  In other words, he can imagine his place in a long line of Jewish kings—from Saul down to him.  Where does he fit in the big picture?  How would the previous kings view his reign?  Would he be remembered as the only king to lose everything the previous kings had fought to preserve?  Indeed, wasn’t everything lost?  Hadn’t the prophecies of Jeremiah been fulfilled to the last detail?  What if things had been different?  What if he had followed the advice of Jeremiah?  What if he had cleansed Jerusalem of its idolatry and wickedness?
The “what ifs” must have burned a hole in Zedekiah soul.  Ironic that his end would be full of burnings when we remember Jeremiah’s ministry started with a feeling “as a burning fire shut up in my bones,” (Jer 20:9) to raise a warning voice.
Jeremiah 34:7 all the cities of Judah that were left, against Lachish, and against Azekah 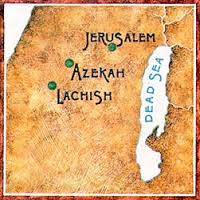 Hugh Nibley
About twenty-five miles southwest of Jerusalem in Lehi’s day lay the powerfully fortified city of Lachish, the strongest place in Judah outside of Jerusalem itself. Founded more than three thousand years before Christ, it was under Egyptian rule in the fourteenth century B.C. when the Khabiri (Hebrews) had just arrived. At that time, its king was charged with conspiring with the newcomers against his Egyptian master. A later king of Lachish fought against Joshua when the Israelites took the city about 1220 B.C. In a third phase, either David or Solomon fortified it strongly.
The city’s strategic importance down through the years is reflected in the Babylonian, Assyrian, Egyptian, and biblical records. These describe a succession of intrigues, betrayals, sieges, and disasters that make the city’s story a woefully typical Palestinian “idyll.” Its fall in the days of Jeremiah is dramatically recounted in a number of letters found there in 1935 and 1938. These original letters, actually written at Jeremiah’s time, turned up in the ruins of a guardhouse that stood at the main gate of the city—two letters a foot beneath the street paving in front of the guardhouse, and the other sixteen piled together below a stone bench set against the east wall. The wall had collapsed when a great bonfire was set against it from the outside.
The bonfire was probably set by the soldiers of Nebuchadnezzar because they wanted to bring down the wall, which enclosed the gate to the city.
Nebuchadnezzar had to take the city because it was the strongest fortress in Israel and lay astride the road to Egypt, controlling all of western Judah. Jeremiah tells us that it and another fortified place, Azekah, were the last to fall to the invaders. (See Jer. 34:7.) An ominous passage from Lachish Letter No. 4:12–13 reports that the writer could no longer see the signal-fires of Azekah—that means that Lachish itself was the last to go, beginning with the guardhouse in flames.
The letters survived the heat because they were written on potsherds.
They were written on potsherds because the usual papyrus was unobtainable.
It was unobtainable because the supply from Egypt was cut off.
The supply was cut off because of the war.”  (“The Lachish Letters: Documents from Lehi’s Day,” Ensign, Dec. 1981, 48) 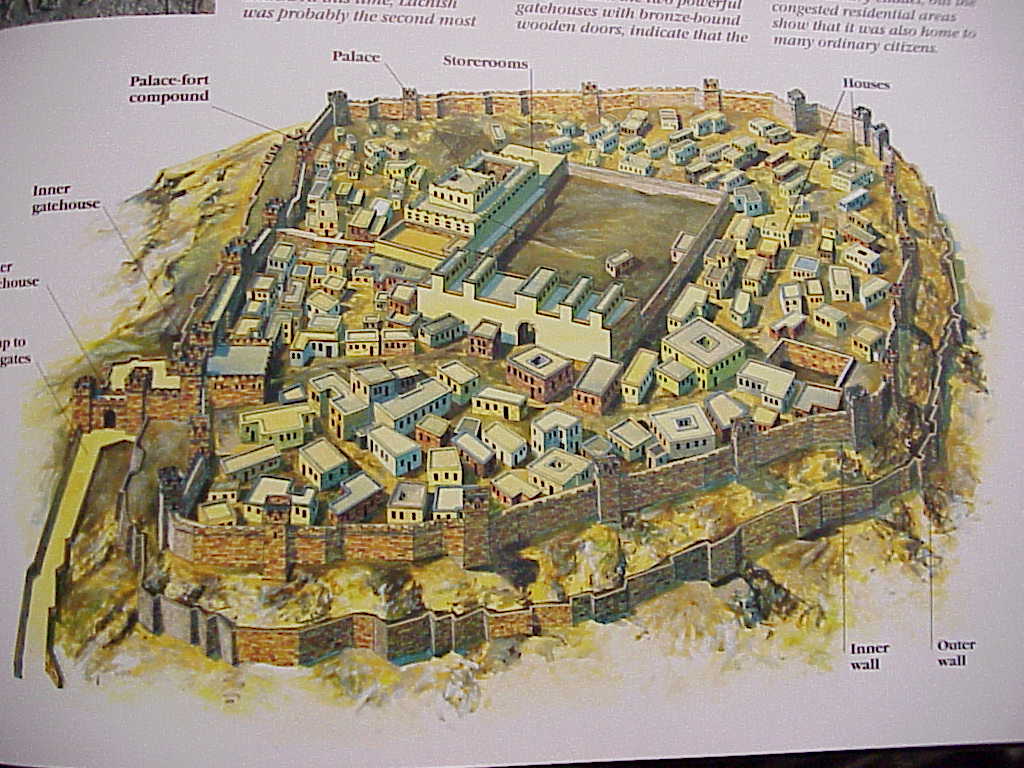