Isaiah 39:1  Merodach-baladan, the son of Baladan

“Merodach-Baladan II, Babylonian Marduk-apal-iddina Ii (“Marduk Has Given Me an Heir”) (died c. 694 bc), king of Babylonia 721–710 and for nine months in 703, who maintained Babylonian independence in the face of Assyrian military supremacy for more than a decade.

“Commencing in 728 the king of Assyria also officially held the title of king of Babylonia. During that time Merodach-Baladan, a member of the Yakin tribe, was a district ruler in Chaldea. During the unrest surrounding the accession of Sargon II of Assyria in 722, Merodach-Baladan entered Babylon and claimed the Babylonian throne, which had belonged to his forebear Eriba-Marduk. An attack by the Elamites two years later so weakened the Assyrians—though both sides claimed victory—that, as king of Babylonia, Merodach-Baladan remained unmolested by Assyria for the next 10 years.

“Sargon’s inscriptions portray Merodach-Baladan as a usurper who oppressed Babylonia and relied on Elamite military power. On the other hand, Merodach-Baladan claimed to be the legitimate heir who had driven the Assyrians from Babylonia. Contemporary Babylonian documents indicate that temples were repaired, irrigation projects were carried out, and life was normal during his reign.” (https://www.britannica.com/biography/Merodach-Baladan-II)

Isaiah 39:1 king of Babylon sent letters and a present to Hezekiah

We have considered Hezekiah’s greatness.  In his reign, one of the greatest miracles has occurred.  He has tried to re-establish righteousness in the throne of Jerusalem.  He has just skirted death by pleading with the Lord.  He has written a psalm like ancient King David.  Now, he receives praise and gifts from Babylon.  Does he think of himself like the wise King Solomon, who entertained the queen of Sheba?  Had the Babylonians come from afar to honor Hezekiah as the queen had come to honor Solomon? 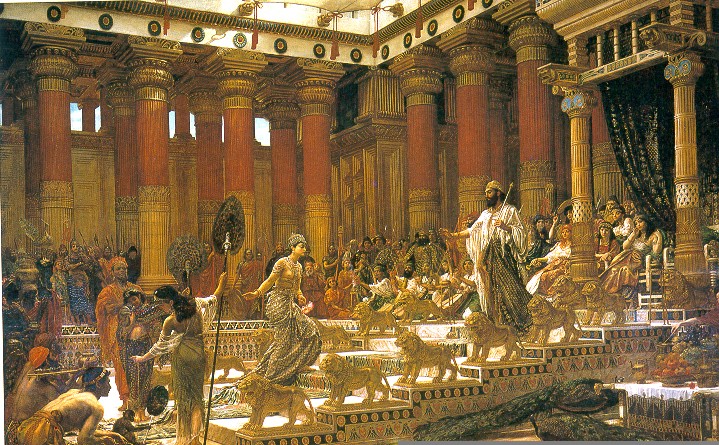 Solomon on his throne

The Babylonian ambassadors were likely developing political alliances with any who opposed Assyrian power.  It was a fleeting relationship of convenience because when Babylon assumes preeminence 90 years later, they become the Jews’ worst enemy.

Isaiah 39:4 What have they seen in thine house?...  there is nothing among my treasures that I have not shewed them

Righteous Hezekiah seems to be both naïve and a bit of a show off.  He is casting his pearls before swine, so to speak.  What is the purpose of showing the Babylonians all his wealth?  Are they going to think, “Wow! Hezekiah is a great and wealthy king.”  Or are they going to think, “Wow! We should bring an army back and take all of this gold for ourselves.”  Well, it takes about a hundred years, but the latter is what ends up happening.

Isaiah 39:6 the days come, that all that is in thine house… shall be carried to Babylon: nothing shall be left

The Babylonians sacked Jerusalem in stages.  We always think of the days of King Zedekiah and Lehi (1 Ne. 1:4) preceding the Babylonian conquest, but prior to Lehi leaving Jerusalem:

And he carried away all Jerusalem, and all the princes, and all the mighty men of valour, even ten thousand captives…

And he carried away Jehoiachin to Babylon, and the king’s wives, and his officers, and the mighty of the land…

And the king of Babylon made Mattaniah his father’s brother king in his stead, and changed his name to Zedekiah.

Zedekiah was twenty and one years old when he began to reign, and he reigned eleven years in Jerusalem. (2 Kings 24:12-17)

There wasn’t much left in the days of Zedekiah, but Jerusalem maintained a tenuous independence. Since the days of King David, no one had ever conquered Jerusalem.  The Jews thought it could never happen.

Then, Nebuchadnezzar’s army laid siege on Jerusalem from the 9th to the 11th years of the reign of Zedekiah, until finally, “the city was broken up, and all the men of war fled.”  The Babylonians overtook Zedekiah, “slew the sons of Zedekiah before his eyes…” and then “he put out the eyes of Zedekiah… bound him in chains, and carried him to Babylon.” (Jer. 52:4-11)

But Nebuzaradan the captain of the guard left certain of the poor of the land for vinedressers and for husbandmen.

The caldrons also, and the shovels, and the snuffers, and the bowls, and the spoons, and all the vessels of brass wherewith they ministered, took they away.

Hence were the words of Isaiah fulfilled.  As the resurrected Lord told the Nephites, “all things that he spake have been and shall be, even according to the words which he spake” (3 Ne. 23:3).

Isaiah 39:7 thy sons… shall be eunuchs in the palace of the king of Babylon

Zedekiah’s sons were killed so this applies more to Jehoiachin’s sons and the wise men taken captive before the reign of Zedekiah.  Ezekiel, Daniel, Shadrach, Meshach, and Abed-nego were some of the early captives.

And the king spake unto Ashpenaz the master of his eunuchs, that he should bring certain of the children of Israel, and of the king’s seed, and of the princes…

Whom they might teach the learning and the tongue of the Chaldeans.

And the king appointed them a daily provision of the king’s meat, and of the wine which he drank: so nourishing them three years, that at the end thereof they might stand before the king.

Now among these were of the children of Judah, Daniel, Hananiah, Mishael, and Azariah. (Dan. 1:3-7)