Isaiah 20:1 In the year that Tartan came unto Ashdod… and fought against it

In 721 BC, the Assyrians sacked Samaria and conquered the kingdom of Israel.  About a decade later, in 711 BC, a rebel city-state named Ashdod fell under the Assyrian wrath.  The rebels sought allies from Egypt, Ethiopia, and Judah.  The Assyrian history recounts the expedition against Ashdod.

“With Samaria’s fall, the last stronghold of opposition to Assyria was extirpated; not only did Egypt lose all of its remaining influence in Asia—its last Libyan rulers were themselves compelled to submit to Assyrian overlordship. By Sargon’s seventh year ‘Pir’u the king of Musru’ (Pharaoh, king of Egypt) is listed among those sending tribute to Assyria. Later in the same year a certain Yamani seized power in Ashdod, an independent principality next to Judah on the coast; trying to organize and anti-Assyrian league and to enroll the help 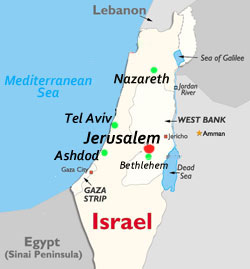 of Egypt, he, as Sargon recounts in his annals, ‘sent bribes to Pir’u king of Musru, a potentate incapable to save him—and asked him to be an ally.’ The rebellious prince tried also to involve Judah in the conspiracy: but Hezekiah, probably at Isaiah’s urging, refused to risk the nation’s fate on so doubtful a venture. Informed of Yamani’s revolt, Sargon gathered chosen troops and sent them against the rebel: ‘In a sudden rage I marched quickly . . . against Ashdod, his royal residence.’ Without Egyptian help, the outcome was not long in doubt—the Assyrian king looted the rebellious city, along with other towns on the Philistine coast.” (https://www.varchive.org/tac/ashdod.htm)

Isaiah 20:2-3 Go and loose the sackcloth from off thy loins… And he did so, walking naked and barefoot

After the capture of the kingdom of Israel and the capture of the ten tribes, remaining kingdom of Judah became very nervous—almost paranoid that they would be the next Assyrian conquest.  Some in Jerusalem may have thought it wise to join Ashdod, Egypt, and Ethiopia in a four way alliance against Assyria.  The idea may have been politically reasonable, but it was also offensive to the Lord who had promised He would fight their battles.  The king is Hezekiah and the prophet is Isaiah.

Now it gets good.  God asks Isaiah to be the object lesson.  He is asked to take off his sackcloth (sackcloth makes for some very scratchy underwear, so Isaiah must be mourning some undisclosed tragedy in sackcloth and ashes).  It sounds fine to get the sackcloth off until the Lord asks him to walk naked and barefoot for three years for a sign to the Jews that Egypt and Ethiopia will be humiliated. The sight must have prompted discussions like:

Azariah:         “He has probably been spending too much time reading the scrolls.  He has obviously lost his mind.”

Shemaiah:    “I heard he is protesting support for Ashdod, suggesting Pharoah will be chased out of Ashdod with his pants down.”

Shemaiah:    “The word is that we are to trust in God not Pharaoh when the Assyrians come for us.”

Johanan:       “Are you kidding?  Are we supposed to trust the word of this barefoot and naked prophet?”

Now here is where we take a moment and pause.  Would God ask his great prophet Isaiah to walk around naked and barefoot?  That breaks all laws of personal modesty and cleanliness.  It is disgusting, revolting, and humiliating.  If we digress for a moment, this is why students don’t like the Old Testament.  They can’t believe that God would ask such a thing.  It’s less confusing to just read the Book of Mormon and New Testament; that way you don’t ever have to deal with the incongruities of the ancient text.

Well, let’s look around the scriptures a bit.  Has anything else like this been done?  Ezekiel was asked by God to bake his bread using human dung as the fuel (Ezek. 4:12) to symbolize the defiled bread the Jews would eat after the capture of Jerusalem. Ezekiel was supposed to set up a model of Jerusalem under siege and lay by it for a year in the site of all the captured Jews of Babylon eating this defiled bread as a foreboding object lesson.  In this case, Ezekiel objected!  Wouldn’t you?  “Ah Lord God! Behold, my soul hath not been polluted: for from my youth up even till now have I not eaten of that which [is defiled]” (Ezek. 4:14)  The Lord responded that he could bake his bread with cow chips instead of human ones, but he was still required to hang out like a homeless man by his Jerusalem model.

For me, the fun is trying to figure out how these stories can be true rather than trying to discount them because they are disgusting or unusual.  What can we learn from the object lessons the Lord gives through his prophets?  These prophets aren’t just preaching truth, they are living object lessons!  The Lord seems to be using some shock therapy to get through to his stubborn and stiff-necked children.  Perhaps we don’t have the full story.  Perhaps Isaiah brokered a deal with the Lord for less time or less nakedness, but the text says he did it!

It is very unlikely that it took the Assyrians very long to take Ashdod.  External sources suggested in happened in 1 year, 711 BC—the same year that the command came to Isaiah to take off his shoes and sackcloth.  Therefore, it is hard to believe that Isaiah walked around naked for 3 full years.  The last two would have been old news with everyone aware of the defeat of Egypt and Ethiopia and the humiliation of their prisoners. As for me and my house, I can believe 3 months of nakedness but not 3 years.

Why doesn’t anyone tell this story in Sunday School?  So many lessons and talks on Isaiah and nobody ever expounds on this chapter!