Isaiah 63:1 Who is this that cometh from Edom, with dyed garments from Bozrah

Bozrah was a city in the land of Edom.  Both were east of the Judah’s inheritance in Canaan.  The language is teaching us that Christ will come from the East, “For as the lightning cometh out of the east, and shineth even unto the west; so shall also the coming of the Son of man be” (Matt. 24:27).

Isaiah 63:1 glorious in his apparel, travelling in the greatness of his strength

For the day of vengeance, the Lord appears ready for battle.  His apparel is appropriate for a military conquest. His appearance is a show of great strength. John the Revelator saw what Isaiah described:

And I saw heaven opened, and behold a white horse; and he that sat upon him was called Faithful and True, and in righteousness he doth judge and make war.

His eyes were as a flame of fire, and on his head were many crowns; and he had a name written, that no man knew, but he himself.

And he was clothed with a vesture dipped in blood: and his name is called The Word of God.

And the armies which were in heaven followed him upon white horses, clothed in fine linen, white and clean.

And out of his mouth goeth a sharp sword, that with it he should smite the nations: and he shall rule them with a rod of iron: and he treadeth the winepress of the fierceness and wrath of Almighty God.

A picture can paint a thousand words.  This phrase is usually spoken espousing the great advantages of communicating with visual images.  However, a picture can paint a thousand words incorrectly and leave a thousand false impressions. Such is the case with almost all artwork depicting the Second Coming of Christ. Almost never does the artwork represent the picture painted by John the Revelator and Isaiah, with Christ in battle array, dressed in red, riding a white horse, surrounded by angelic cavalry, appearing to save Jerusalem in might and power (see Rev. 19:11-16).  Instead, we get the impression the Savior comes dressed in white to the empty deserts of central Utah surrounded by female angels playing trumpets. 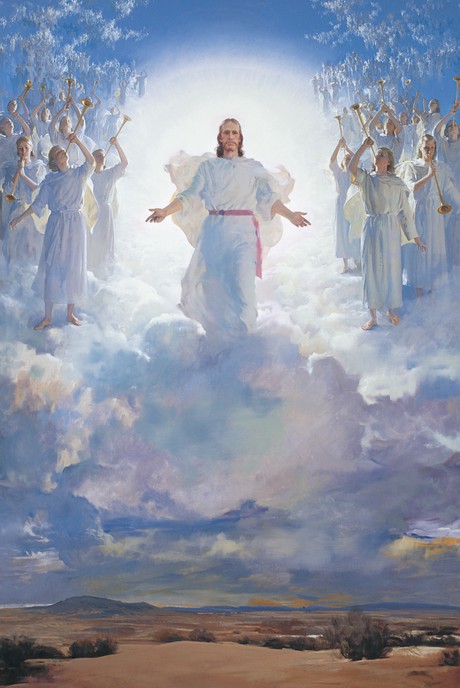 The following painting, a non-Mormon rendition, may not be more esthetically pleasing but it is more scripturally accurate 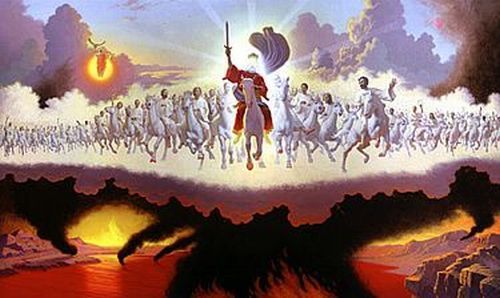 In Revelation 19:13, [John] describes Christ at his second coming, mentioning that “he was clothed with a vesture dipped in blood.” This may puzzle those who picture him clothed in glorious white. Nevertheless, it is in perfect agreement with other scriptures that tell us that the Savior’s apparel will be red at his coming. (See Gen. 49:11; Isa. 63:2; D&C 133:48.) (Ensign, Dec. 1987, 49)

Isaiah 63:3, 5 I have trodden the winepress alone

When the grapes are finally harvested, they are placed in a receptacle, or winevat, and trampled to express the juice. This was an arduous way to make grape juice and was usually attended to by a group of men rather than a single individual.  Those familiar with the process would have realized that this was not a task done by one person.

“Usually several men would work together in this activity, singing and encouraging one another. (Isa. 16:10; Jer. 25:30; 48:33) Sometimes the work would fall upon only one man, the others having become discouraged or turning to easier tasks.

The image is reminiscent of Savior in the garden of Gethsemane, where Christ was all alone.  You may remember that Peter, James, and John were only a stone’s throw away, but they quickly fell asleep, leaving the Master completely alone to perform the task that would have been by far his most difficult.  Just when he most needed some support, He instead would receive not even a word of encouragement from his friends (Matt. 26:36-46; Lu. 22:39-46).

This picture is a familiar one in Israel. The wine is trampled from the grapes in great vats, staining the garments of the laborers as though with blood. But in this case the second coming of Christ is involved, the one harvesting the crop is the Lord himself, and the winepress is full of the wrath of God. (The Millennial Messiah: The Second Coming of the Son of Man [Salt Lake City: Deseret Book Co., 1982], 503)

Isaiah 63:3 I will tread them in mine anger, and trample them in my fury

(In mortality), Jesus accomplished what he was sent to do, and feeling satisfied of this, when he was about to leave the earth he said he had finished the work his Father gave him to do. But there was another work, another event that was to transpire in the latter days, when he should not be led as a lamb to the slaughter or be like a sheep before the shearers; when he would not act in that state of humiliation and quiescence, but when he will go forth as a man of war and tread down the people in his anger and trample them in his fury, when blood should be on his garments and the day of vengeance in his heart, when he would rule the nations with an iron rod and break them to pieces like a potter's vessel. (The Gospel Kingdom: Selections from the Writings and Discourses of John Taylor, selected, arranged, and edited, with an introduction by G. Homer Durham [Salt Lake City: Improvement Era, 1941], 110 - 111)

Isaiah 63:4 For the day of vengeance is in mine heart, and the year of my redeemed is come

There must be some reason why he was allowed to suffer and to endure; why it was necessary that he should give up his life a sacrifice for the sins of the world, and there must be a reason why he should come forth in judgment to execute vengeance, indignation, and wrath upon the ungodly. In these reasons we and all the world are intimately concerned; there is something of great importance in all this to us. The whys and wherefores of these great events are pregnant with importance to us all. When he comes again, he comes to take vengeance on the ungodly and to bring deliverance unto his Saints. "For the day of vengeance," it is written, "is in mine heart, and the year of my redeemed is come." (Isaiah 63:4.) It behooves us to be made well aware which class we belong to, that if we are not already among the redeemed, we may immediately join that society, that when the Son of God shall come the second time with all the holy angels with him, arrayed in power and great glory to take vengeance on them that know not God and obey not the gospel, or when he shall come in flaming fire, we shall be among that number who shall be ready to meet him with gladness in our hearts and hail him as our great deliverer and friend. (The Gospel Kingdom, 111)

Isaiah 63:7 I will mention the lovingkindnesses of the Lord

Lesson on Linguistics:  It is doubtful that the word lovingkindnesses existed in English until coined by William Tyndale.  William Tyndale was one of the first individuals to translate the Bible into English—even before the King James Translators took up the task.  Imagine yourself translating the bible from Hebrew to English and you come across a word in the Hebrew which means “kind acts or tender mercies performed out of pure love.”  How can such an idea be succinctly represented?  In many cases William Tyndale would combine existing words, creating words which were completely new but carried the correct idea.

“Part of the precious nature of Tyndale’s newest jewel [of translation] lay in the manner in which he adapted Hebrew structures into English. In The Obedience, Tyndale noted that Hebrew went into English a thousand times better than it went into Latin.  He was true to the Hebrew, and the English language was enriched by its syntax…

“Tyndale’s understanding of the Hebrew superlative produced such musically pleasing descriptions as ‘the holy of holies’ instead of ‘the holiest place’ and ‘the song of songs’ rather than ‘the best song.’ He created single words by combining two words he felt best represented the Hebrew, giving us ‘scapegoat,’ ‘shewbread,’ ‘taskmaster,’ and ‘Passover.’” (S. Michael Wilcox, Fire in the Bones:  William Tyndale—Martyr, Father of the English Bible, [SLC: Deseret Book, 2004] 129-130)

Certainly, “lovingkindnesses” is also one of Tyndale’s brilliant combinations. It was true to the Hebrew and true to the underlying principle of God’s love and kindness for his children.

When Jesus comes in overwhelming majesty and power, in at least one of His appearances He will come in red attire, reminding us that He shed His blood to atone for our sins (see D&C 133:48; Isa. 63:1). His voice will be heard to declare, again, how alone He once was: “I have trodden the wine-press alone … and none were with me” (D&C 133:50).

The more we know of Jesus’ Atonement, the more we will humbly and gladly glorify Him, His Atonement, and His character. We will never tire of paying tribute to His goodness and loving-kindness. How long will we so speak of our gratitude for His Atonement? The scriptures advise “forever and ever”! (See D&C 133:52.)

Praise be to God for the harvest of such bounteous blessings from the Restoration which, truly, are running over. I humbly exclaim with Jacob, “O how great the plan of our God” (2 Ne. 9:13).

Praise be to Jesus for His great Atonement, the central act of all human history! (Ensign, Apr. 1997, 10)

Isaiah 63:18 our adversaries have trodden down thy sanctuary

About 589 BC, the Temple of Solomon was trampled by the Babylonians.  The temple reared after the captivity, the Temple of Zerubbabel, was desecrated by Syrian King Antiochus IV when he erected “an altar to the Greek god Zeus” in about 168 BC (Galbraith, DB, Ogden, DK, Skinner, AC, Jerusalem: The Eternal City [SLC: Deseret Book, 1996], 142). In 70 AD, the temple of Herod was burned by the Romans such that there was not left one stone upon another (Matt. 24:2).

The Babylonians, Syrians, and Romans have all taken their turn fulfilling Isaiah’s prophecy.  Just prior to the Second Coming, “all nations” will siege Jerusalem and desecrate the temple one more time (Zech. 12:1, Dan. 8:13-14).  Then will the Lord come and execute vengeance. It will be his third and most impressive cleansing of the temple.