This is a difficult chapter.  Fortunately, the footnotes in the LDS scriptures explain much of the meaning.  They focus on the immediate, literal fulfillment rather than the apocalyptic component of the message.  Much of this chapter is actually Isaiah telling us a bit of his vision of the end of the world.  Geographically, the message is for the land around Babylon and the Arabian Peninsula. Figuratively, it is about the destruction of Satan’s dominion.

Isaiah 21:1 The burden of the desert of the sea

The terrible land to the south spoken of in this verse is the Negev Desert of Sinai but also applies to the Arabian Desert.  The latter is the focus of the last half of the chapter.

The lands of Elam and Media border Babylon.  They are the object of this destructive burden.  All of their sighing will cease when the destruction proclaimed makes a full end.  Isaiah is seeing the destruction of Babylon and neighboring lands at the end of the world. 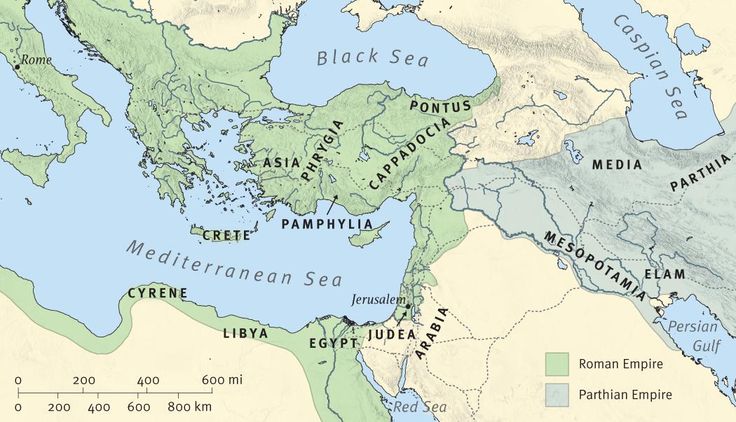 Isaiah 21:3 pangs have taken hold upon me… I was dismayed at the seeing of it

The footnote says, “Isaiah was astonished at the cataclysmic scene he saw in vision, even though an enemy was the nation destroyed.”  What did he see that was so heart wrenching?  The answer can be found in the book of Revelation.

Isaiah 21:6 Go, set a watchman, let him declare what he seeth

A watchman is a prophet, but Isaiah is not the watchman because it is not his privilege to declare the vision.  He tells us such an abbreviated account—almost not enough to know what he saw.  Nephi said it best:

And when the day cometh that the wrath of God is poured out upon the mother of harlots, which is the great and abominable church of all the earth, whose founder is the devil, then, at that day, the work of the Father shall commence, in preparing the way for the fulfilling of his covenants, which he hath made to his people who are of the house of Israel.

And it came to pass that the angel spake unto me, saying: Look!

And I looked and beheld a man, and he was dressed in a white robe.

And the angel said unto me: Behold one of the twelve apostles of the Lamb.

Behold he shall see and write the remainder of these things; yea and also many things which have been.

The suggestion is that Isaiah saw John the Revelator as the watchman who was to declare the vision of Revelation.

Isaiah 21:7 he saw a chariot with a couple of horsemen

…behold a white horse: and he that sat on him had a bow; and a crown… and he went forth conquering

… And there went out another horse that was red: and power was given to him that sat thereon to take peace from the earth

… And I beheld and lo a black horse; and he that sat on him had a pair of balances in his hand

…And I looked, and behold a pale horse: and his name that sat on him was Death, and Hell followed with him. (Rev. 6:2-8)

The watchman seems animated when he sees the lion.  What could the lion represent?

… behold the Lion of the tribe of Judah, the Root of David, hath prevailed to open the book and to loose the seven seals thereof. (Rev. 5:5)

And who is the Lion of the tribe of Judah, the Root of David?  It is Jesus Christ (see Rev. 22:16).  Isaiah sees John the Revelator, or should we call him John the Watchman, the horsemen of Rev. 6, and the triumphant Messiah at the Second Coming. All of these lead up to the apocalyptic destruction of Babylon.

Isaiah 21:9 Babylon is fallen, is fallen

John gave us more to chew on:

…Babylon the great is fallen, is fallen, and is become the habitation of devils

…Come out of her, my people, that ye be not partakers of her sins

…Therefore shall her plagues come in one day, death and mourning

…they shall see the smoke of her burning

…Thus with violence shall that great city Babylon be thrown down

Are you going to prepare for it? We say we are the people of God and are building up the kingdom of God. We say we are gathered out of the nations to establish Zion. Let us prove it by our works…  (Journal of Discourses, 13:93)

Enemies that come in the night

Now it is about the enemies that come in the night I want just to make one reference.

There are insidious forces among us that are constantly trying to knock at our doors and trying to lay traps for our young men and women, particularly those who are unwary and unsophisticated in the ways of the world. I speak of the battle against liquor by the drink, gambling, prostitution, pornography, In the period of the intensive military operations of the Assyrian army in Babylonia and Elam (652–646 B.C.E.), the Kedarites under Abiateʾ and Aamu sons of Teʾri were among other units of nomads that exerted pressure on the inhabited area along the frontier of the desert, from the region of Jebel Bishrī to the vicinity of Damascus. The grave situation resulting from the pressure of the nomads compelled the king of Assyria to launch an extensive campaign against them mostly in the desert and under difficult conditions (Ashurbanipal's ninth campaign). The information in Jeremiah 49:28ff. combined with that in the Babylonian Chronicle (BM 21946 rev. 9–10) shows that in 599 B.C.E. units of Nebuchadnezzar's army raided the encampments of the Kedarites in the western region of the Syrian desert.and our efforts to aid Christian people who desire to have one day dedicated to keeping the Sabbath day holy. All we have to do is to remember what the Lord said in order to impress the importance of keeping the Sabbath day holy: "And that thou mayest more fully keep thyself unspotted from the world, thou shalt go to the house of prayer and offer up thy sacraments upon my holy day."  (D&C 59:9) Defenders of the faith should be alert, then, to see to it with all their influence that there is an opportunity given to the working man, the boy and the girl, the husband and the wife to have one day in the week when they can be with their families and have one day consecrated as a day of rest. Watchmen, be alert to the "dangers of the night"! (Conference Report, April 1970, 54)

In Isaiah, the prophet asks, “Watchman, what of the night?”  This generation of youth will be the torchbearers in the future, possibly in the darkest period of the world. So remember, brethren:

The God of the great endeavor gave me a torch to bear.

I lifted it high above me in the dark and murky air.

Straightway with loud hosannas the crowd acclaimed its light,

And followed me as I carried my torch through the dark and starless night.

Til mad with peoples’ praises and drunken with vanity,

I forgot it was the torch that drew them and fancied they followed me.

And my arm grew sore and weary upholding the shining load,

And my tired feet went stumbling over the hilly road.

I fell with the torch beneath me, in a moment the flame was out.

But lo, from the throng a stripling sprang forth with a mighty shout,

Caught up the torch as it smouldered and lifted it high again,

Til fanned by the winds of heaven it fired the souls of men.

As I lay alone in the darkness, the feet of the trampling crowd,

Passed over and far beyond me, their praises proclaimed aloud.

And I learned in the deepening shadow this glorious verity,

‘Tis the torch the people follow, who ere the bearer be.

A great truth. They will be the torchbearers. May we be the watchmen. (Conference Report, Oct. 1983, 39)

Three Arabian cities are mentioned in this section:  Dumah, Tema, and Kedar.  Abraham’s son Ishmael (by Hagar) had 12 sons like Jacob did.  Three of their names are Dumah, Tema, and Kedar (Gen. 25:12-16).  Their descendants settled in the Arabian Peninsula.  They lived as nomads and for the most part stayed out of the military exchanges that plagued the Israelites. 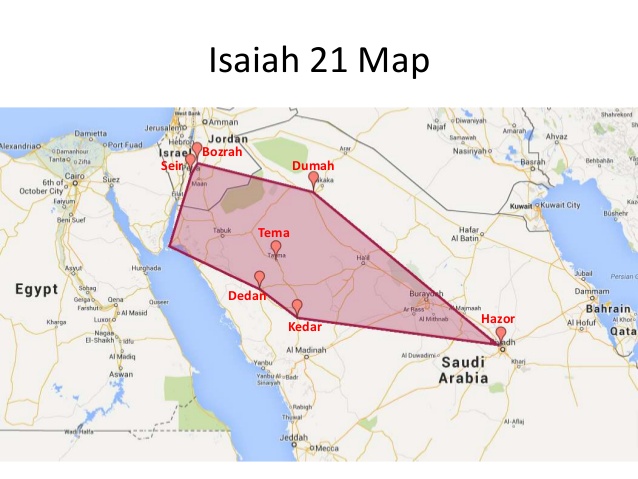 “Regarding their religion, Assyrian inscriptions tell us that Sennacherib captured of several Arabian deities in the Kedarite city of Dumah. The chief deity was Atarsamain, or the morning star of heaven… The rest of their pantheon of gods consisted of Dai, Nuhai (Nuhay), Ruldai (Ruda), Abirillu, and Atarquruma…

“The Kedarites are mentioned in a number of places in the Bible, and always referred to as nomads.” (http://nabataea.net/kedar.html)

Isaiah 21:14-15 The inhabitants of the land of Tema brought water to him that was thirsty

When the Arabian nomads of Tema found a wandering traveler, they would come to his aid by giving him water and bread.  These may have been criminals or refugees from various wars as the text states, “they fled from the sword.”  Lehi’s family might have received the same generous treatment when traveling through Arabia if they weren’t travelling as such a big group. Their size may have made them an object of plunder, as Hugh Nibley explained (Lehi in the Desert and the World of the Jaredites, 72-73).  It seems that Lehi’s family was trying to avoid contact with others, “The Lord had not… suffered that we should make much fire, as we journeyed in the wilderness.” (1 Ne. 17:12)  Fires would attract attention.  Besides, the Lord wanted Lehi’s family to learn how to rely on him and not on the Arabs of Tema and Kedar (1 Ne. 17:14).

…In the period of the intensive military operations of the Assyrian army in Babylonia and Elam (652–646 B.C.E.), the Kedarites under Abiateʾ and Aamu sons of Teʾri were among other units of nomads that exerted pressure on the inhabited area along the frontier of the desert, from the region of Jebel Bishrī to the vicinity of Damascus. The grave situation resulting from the pressure of the nomads compelled the king of Assyria to launch an extensive campaign against them mostly in the desert and under difficult conditions (Ashurbanipal's ninth campaign). The information in Jeremiah 49:28ff. combined with that in the Babylonian Chronicle (BM 21946 rev. 9–10) shows that in 599 B.C.E. units of Nebuchadnezzar's army raided the encampments of the Kedarites in the western region of the Syrian desert. (http://www.jewishvirtuallibrary.org/kedar)

Isaiah can’t be talking about Nebuchadnezzar’s exploits in Arabia.  The fulfillment of his prophecy comes “within a year” and therefore probably refers to the battles of the Assyrian king Sennacherib in 703 BC which refer to the Queen of the Arabs and the capture of the Queen’s brother. (https://en.wikipedia.org/wiki/Qedarite)